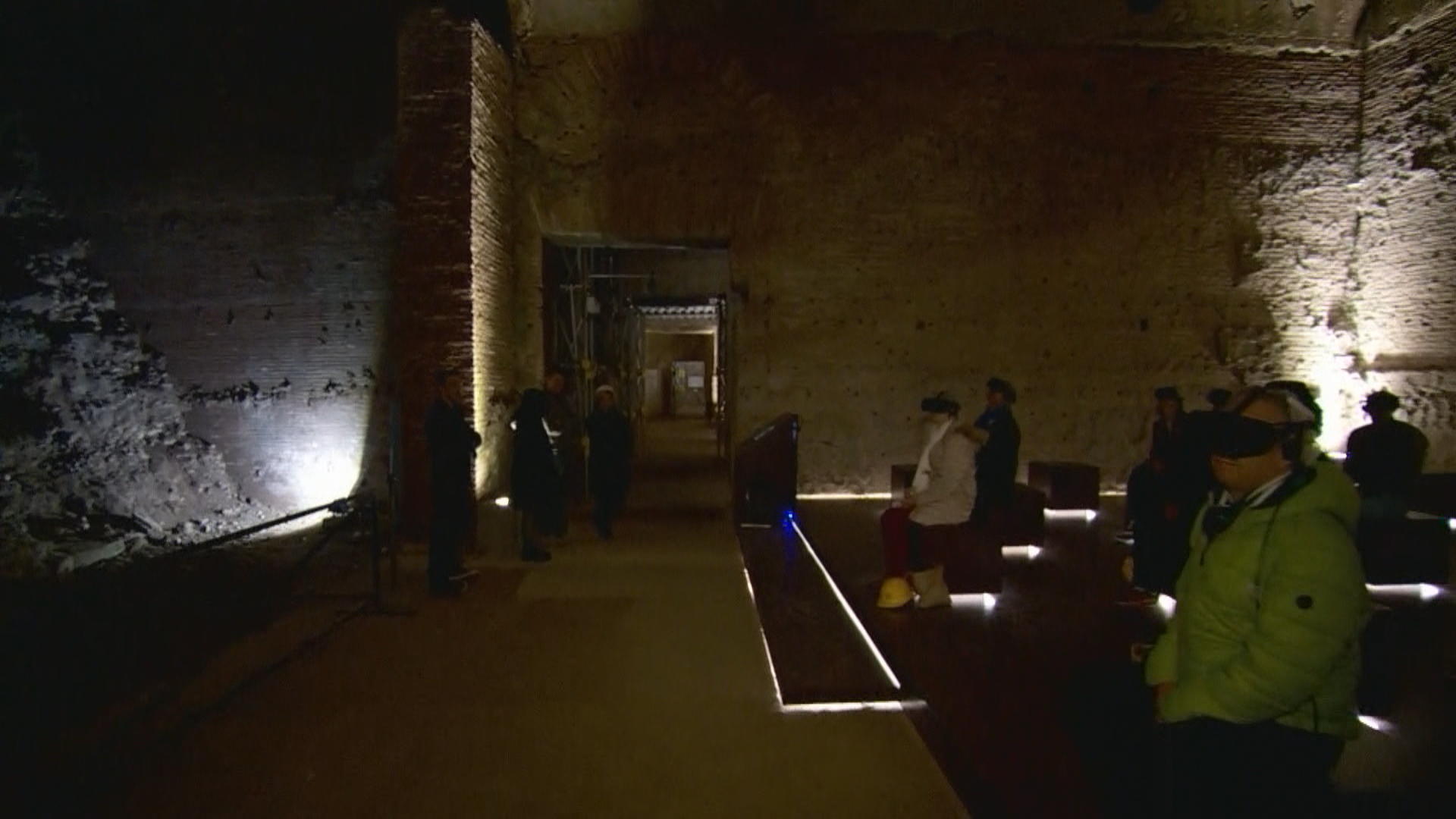 Cutting-edge technology is helping bring ancient Rome back to life.

Visitors at historic sites thousands of years old can now use virtual reality headsets to see what they once looked like. Digital artists used Renaissance-era artists’ depictions to help re-envision the relics. CBS News correspondent Seth Doane went inside the ancient underground ruins in Rome, where tourists can see what’s no longer there.

The cavernous space was once above ground, the grand home of Emperor Nero, and considered one of the most magnificent palaces ever built. Its name, “Domus Aurea,” means “golden house.” It’s hard to believe it was once colorful and flooded with light. But now, modern technology is letting tourists peek into the past.

Two thousand years ago, this labyrinth, now underneath the city of Rome, was the sprawling home of Emperor Nero, stretching the size of three football fields. Today, tourists can explore it, but the colors, light and opulence of this ancient Roman villa were unimaginable until this month, when visitors could start using virtual reality headsets.

“You always try to imagine in your mind what it must’ve been like, and this helps tremendously,” said Tom Papa, a tourist from New York.

“In the ancient historiography, he was depicted as a monster,” D’Alessio said.

The emperor’s massive compound was covered over. It was forgotten about for nearly 1,500 years until Renaissance artists tunneled down into what they believed was an ancient Roman cave.

“Painters during Renaissance times would come through that hole?” Doane asked, pointing up to it.

The marvelous frescos they saw influenced art for centuries, and their paintings of the site would become a roadmap for a much later generation of digital artists.

“Nothing is invented, nothing is invented; every part of the reconstruction has a scientific base,” said Raffaele Carlani, an architect and graphic designer whose company, KatatexiLux, painstakingly created the virtual reality show.

“And you recognize from this shape, this really strange shape here,” Carlani said.

“So you go back to these Renaissance paintings to recreate what this looked like,” Doane said.

“And then transition to here digitally,” Doane said, pointing to the recreation on a computer.

It’s Italy, so of course his studio has its own frescoed ceiling. Working from the town of Amelia, outside Rome, designers used the graphically-rich technology of video games to virtually transport tourists inside the ancient Domus Aurea, to see its grandeur, colorful marble, and sweeping views of Rome.

“You look down at the grass and the grass is moving in the wind!” Doane said.

“This is funny. I saw a lot of children that try to… touch the grass,” Carlani said, bending over the scene.

The city of Rome has used technology to reimagine several tourist sites, including the forums of Caesar and Augustus, where history is illuminated through lasers and light shows projected on the ruins.

“Through virtual reality, you can understand how these spaces were in the past,” said Francesco Prosperetti, the superintendent for archeology in Rome. He was the one who pushed to use virtual reality here.

“It’s something that nobody can imagine before,” Prosperetti said.

“To get closer to these things of ancient past that the only way is to use technology,” Prosperetti said.

The architecture and paintings here influenced the likes of Michelangelo and Raphael. Excavation work continues, and there’s still another 30 percent of this palace to be unearthed.

"Mom, am I going to die?" Parents question cell tower's link to cancer