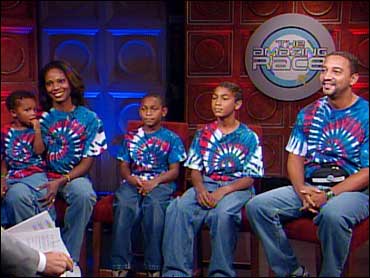 It was kids vs. adults at the premiere of "The Amazing Race: Family Edition." The Black and Linz families sprinted to the finish, both knowing that the last team to arrive would be eliminated.

But there were no long faces for the Blacks, who live in Woodbridge, Va., when they visited The Early Show to talk about their experience.

Dressed in their tie-dyed shirts and blue jeans, Reggie and Kimberly looked happy as did their children — Kenneth, 11, Austin, 8 and little Jordan on mom's lap.

"We're blessed we were even chosen to be on the show," Kimberly Black, 40, said. "It was an honor. Everybody was so nice."

Her 42-year-old husband added, "You have to look at it like that. How many people in America have a chance to do this? If we come here, if we act like we're unfortunate, that's a bad attitude."

The kids, except for Jordan who was not part of the race, remembered it as fun experience.

"We got to do a lot of stuff that we would have never done in our lives before," Kenneth said. "Well, at least when we were kids."

The 10 teams started out in New York City, crossed the Delaware River and ended up in Lancaster, Pa. As co-anchor Harry Smith pointed out, the selection process to be part of the show was longer than the time the Blacks spent participating in it.

So what went wrong?

"We were trying to be calm about it," Reggie Black added. But the strategy did not pay off. Watching the competition play out on TV, Reggie Black admitted he felt "kind of sad.

"I really did, because that's not us. We're winners here. But we just didn't come through that day."

The hardest part for the parents was crossing the Delaware River led by a captain dressed as George Washington.

The family struggled against the current, slowly drifting away from the destination across the river. Ultimately, sons Kenneth and Austin showed their parents what they were made of by making it across the river and back, maintaining a lead on the last three teams, the incredibly lost Paolo, Godlewski and Linz families.

Kenneth, actually, considered the challenge the best part of the race. "I've never rowed a boat before and it was a real challenge," he said.

Austin said trouble for him came when he got stuck in the mud.

The two kids did well at building the house together. The teams where given the choice to build a house or push a buggy. So why did the Black family choose the house?

"That's obvious," Reggie Black said with a smile.; "America would have been like, they can't win the race and they can't think right. If we'd have pushed the buggy – obviously, if that was our only choice - we had no muscle."

It took the family about 20 minutes to complete the task. "We did a good job with that," Reggie Black said, pleased with his family's effort.

A look back at the morning of Sept. 11