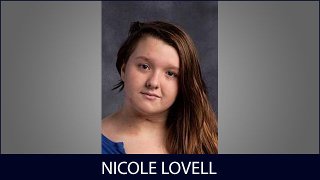 BLACKSBURG, Va. - A Virginia Tech student has been charged with first-degree murder in the death of a 13-year-old girl whose remains were found in North Carolina.

Earlier Saturday, police arrested David Eisenhauer, an 18-year-old Virginia Tech freshman from Columbia, Maryland, and charged him with abduction. He was charged with murder once the girl's remains were found.

The girl had been missing since last week. Her family says she pushed a dresser in front of her bedroom door and climbed out a window Tuesday night or Wednesday morning.

Virginia Tech said in a press release that hundreds of its cadets ended up participating in the search for Lovell.

The Baltimore Sun reports that Eisenhauer ran cross country at Virginia Tech. He is being held without bond at Montgomery County jail.

Police say Lovell's remains will be sent to the medical examiner's office in Roanoke, Virginia for an autopsy.