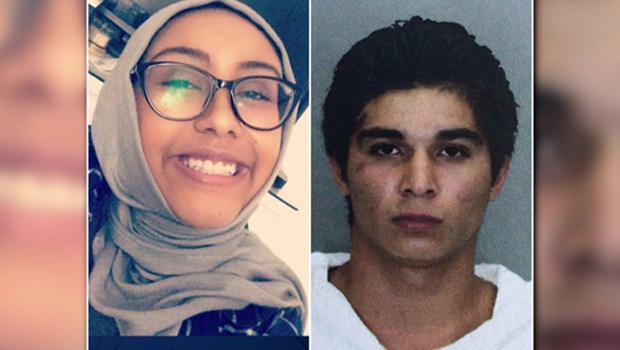 STERLING, Va. -- Police in Virginia charged a 22-year-old man with killing a teenage girl who was reported missing after she and her friends left a mosque early Sunday.

Fairfax County police charged Darwin Martinez Torres with murder after they found what they believe is the 17-year-old girl's body in a pond Sunday afternoon.

The girl was walking from the All Dulles Area Muslim Society, where she was participating in overnight activities, toward a shopping center to get food with a group of friends around 3 a.m Sunday when she got in a dispute with a man in a red car, reports CBS affiliate WUSA9. Police say the man got out of his car and assaulted her.

Police say she got separated from her friends and they called police when they couldn't find her.

The mosque and relatives identified the girl as Nabra Hassanen.  She was a sophomore at South Lakes High School in Reston, Virginia, and would have been starting her junior year this fall, friends said.

Fairfax Police began searching at 4 a.m. Sunday. The body was found Sunday around 3 p.m. floating in the pond in Sterling. A bat was found near the scene, reports WUSA9.

Police said they arrested Torres after pulling over a car they said was driving suspiciously. Monday, he was ordered held without bond pending a July 19 court appearance.

The chief medical examiner will confirm the identity of the victim and determine the exact cause and manner of her death.

"We are devastated and heartbroken as our community undergoes and processes this traumatic event," the society said in the news release. "It is a time for us to come together to pray and care for our youth." It said the society was enlisting licensed counselors to assist anyone in need.

Authorities are still trying to determine a motive, but say that they don't have evidence to suggest that this was a hate crime.