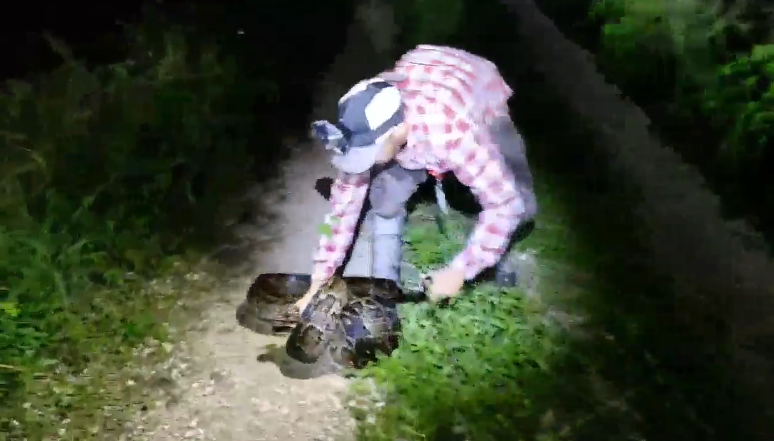 Dramatic new video shows a man rescuing an alligator that is being attacked by a python in the brush of the Everglades. Mike Kimmel got to the gator just in time, as the nearly 10-foot python was squeezing it to death.

The video shows Kimmel who bravely picked up the alligator and unraveled it from the snake's tight grip. The alligator falls to the ground, and Kimmel walks away, carrying the python with it. He holds the python with his bare hands as it wriggles around, and eventually, he and a partner subdue it long enough to drop it in a bag.

Kimmel has his own company, Martin County Trapping and Removals, which focuses on python removal. He shared the video on the company's Facebook Saturday, and it has since gone viral.

The other man seen in the video is Jack Hubbard, a volunteer who accompanied Kimmel to see what it was like to be part of the python program first hand.

Hubbard looks excited when the python is caught and bagged -- the two high five after executing the capture. Hubbard got over his fear of snakes, and Kimmel added another python to his list of captures.

This was not Kimmel's first time dealing with big snakes in the Florida Everglades. He is one of the many people who help Florida take out the invasive species from the state's public lands. He was a contractor for the South Florida Water Management District, CBS affiliate WTSP-TV reports. Over the past year, 24 other state contracted python hunters have helped remove more than 1,000 snakes from the Everglades.