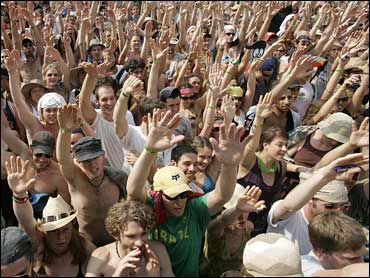 Warren Weitzer is 40 years old, and there's no way he's going to share a portable toilet and camp out with thousands of other people just to see The Police perform at the Bonnaroo Music and Arts Festival.

"I don't do that. I won't," said Weitzer, a businessman from Syracuse, N.Y.

Instead, he'll have access to a real bathroom, enjoy free and discounted food and drinks and then he'll be driven to a hotel 30 miles away from the festival site in Tennessee.

"I will go VIP or not go at all," Weitzer said.

Bonnaroo draws 80,000 people to a farm in rural Manchester, 65 miles south of Nashville, but not all of them want to sweat through four days of music under sometimes inclement weather, crammed into the crowded tent city.

"For some consumers, there's no price tag too high for that," Waddell said.

At Lollapalooza in Chicago's Grant Park, private cabanas on the shore of Lake Michigan cost more than $32,500 for a party of 30. Air-conditioned viewing stands were available for the New Orleans Jazz and Heritage Festival and Bonnaroo artists will perform a private show for VIP guests on opening night Thursday.

"There's a psychological effect that comes when you know you're doing as much as they allow anyone to do," Weitzer said. "From the moment you get off the plane you don't have to worry about a thing."

Weitzer says he has no spending limits when it comes to the music festivals he attends every year like JazzFest, Vegoose in Las Vegas and Gathering of the Vibes, a jam band festival in Bridgeport, Conn.

If he can buy VIP tickets to these festivals, Weitzer will, but he says Bonnaroo's package of amenities is the best for the price he's paying, at least $1,300 including airfare.

"The hotel is a bonus you can't get at other festivals," Weitzer said. "It's all a question of what's important to you."

If Weitzer is the typical VIP festival guest - an older, wealthier, and more finicky music buff - than 23-year-old college student Laura Beamon is the exception.

Beamon and her husband skimped on their wedding to afford $1,121 for a pair of tickets to Bonnaroo, more than twice as much as regular tickets. In fact, Bonnaroo is their honeymoon.

"This could be the only year we could do this," said Beamon, a Darton College student in Albany, Ga. "Why not go all out?"

For a couple who spend only a few hundred bucks a year on concert tickets, VIP tickets could be a gamble, she said. "Twelve-hundred dollars is a lot of money to spend on anything."

But she's betting on organizers to provide her with a relatively stress-free weekend, from the short walks to her private camping area to the air-conditioned bathrooms and hot showers.

Without those benefits, "you have to work harder to stay in a good mood and have a good time," she said. "I just want to have more space and have more fun."

Bonnaroo's phenomenal success over the past five years is based in part on the intense fan loyalty in the face of rain, heat, traffic, smelly toilets and high-density camping. Most of these people were drawn to Bonnaroo's initial jam band-heavy lineups, says Waddell.

2"The jam band fan will notoriously travel to some of the remotest places on Earth. The journey was half the fun," Waddell said. "But mainstream rock fans aren't as adventurous."

With last year's lineup expanding to include headliners Tom Petty and Elvis Costello, and this year including acts as varied as rockers The White Stripes and Pulitzer Prize-winning jazz legend Ornette Coleman, the festival has to reach out to those fans who would be more reluctant to go, Waddell said.

Travel provider Target Sports Adventures adjusts their hotel and air travel packages to the customer and the musical event, whether its Bonnaroo in Tennessee or Vegoose in Las Vegas.

Sam Comerchero, director of operations, says the Police headlining this year has made it easier to sell $800 hotel packages to 30 and 40-year-olds interested in seeing the band for the first time since they broke up in 1984.

"They were a band that was popular in the '70s and '80s," Comerchero said. "That demographic will turn out for Bonnaroo."

Still, the VIP crowd at music festivals typically makes up only 10 percent of the total tickets sold, says Waddell.

"It's not a profit center for the festival," Goodstone said. "We make sure that the packages are well priced."

Waddell says there's a limit to what music fans are willing to pay.

"You always have to be careful about pricing a segment out of the market," Waddell says. "But the VIPs help subsidize those other ticket prices to keep them at a more affordable level."