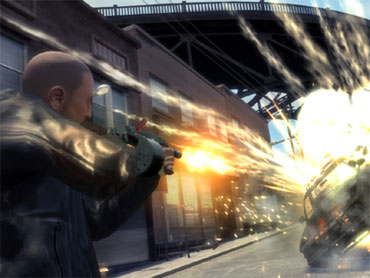 The Supreme Court on Tuesday expressed sympathy for a California law that aims to keep children from buying ultra-violent video games in which players maim, kill or sexually assault images of people but justices seemed closely split on whether the restrictions are constitutional.

The high court has been reluctant to carve out exceptions to the First Amendment, striking down a ban on videos showing graphic violence to animals earlier this year.

California officials argue that they should be allowed to limit minors' ability to pick up violent video games on their own at retailers because of the purported damage they cause to the mental development of children. Some justices appeared to agree.

"We do not have a tradition in this country of telling children they should watch people actively hitting schoolgirls over the head with a shovel so they'll beg with mercy, being merciless and decapitating them, shooting people in the leg so they fall down," Chief Justice John Roberts said.

Roberts decried that one game lets a player "pour gasoline over them, set them on fire and urinate on them." "We protect children from that," he said. "We don't actively expose them to that."

California's 2005 law would prohibit anyone under 18 from buying or renting games that give players the option of "killing, maiming, dismembering, or sexually assaulting an image of a human being." Parents would be able to buy the games for their children, but retailers who sell directly to minors would face fines of up to $1,000 for each game sold.

That means that children would need an adult to get games like "Postal 2," the first-person shooter by developer Running With Scissors that features the ability to light unarmed bystanders on fire. It would also apply to the popular "Grand Theft Auto IV," a third-person shoot-'em-up from Rockstar Games that allows gamers to portray carjacking, gun-toting gangsters.

Some Supreme Court justices wondered where the regulation would stop if they allowed California's law to go forward.

"What about films?" asked Justice Ruth Bader Ginsburg. "What about comic books?"

Justice Antonin Scalia wondered if movies showing drinking and smoking might be next.

"I am concerned with the First Amendment, which says Congress shall make no law abridging the freedom of speech," he said. "It has never been understood that the freedom of speech did not include portrayals of violence. You are asking us to create a whole new prohibition which the American people never ratified when they ratified the First Amendment."

The California law never took effect. Lower courts have said the law violates minors' constitutional rights under the First and Fourteenth amendments, and that the state lacked enough evidence to prove that violent games cause physical and psychological harm to minors. Courts in six other states, including Michigan and Illinois, reached similar conclusions, striking down similar bans.

The Supreme Court will make a decision sometime next year.

California lawmakers were trying to help parents control what type of video games their children had access to, said Zackery P. Morazzini, a California supervisory deputy attorney general who argued the case for the state.

But a lawyer for the Entertainment Merchants Association said that there was no proof that violent video games were any more harmful than television, books or movies. "We have a history in this country of new mediums coming along and people vastly overreacting to them, thinking the sky is falling, our children are all going to be turned into criminals," Paul M. Smith said.

The case appeared to divide the court's conservative members, with Justices Scalia and Samuel Alito engaging in a spirited discussion about the original meaning of the Constitution.

"I think what Justice Scalia wants to know is what James Madison thought about video games," Alito said to laughter in the courtroom.

"No, I want to know what James Madison thought about violence," Scalia retorted.

Showing stronger support for the law, Justice Stephen Breyer said it doesn't make sense to allow bans on minors accessing pornography and not be able to block them from graphically violent video games.

What if a video game showed "gratuitous torture of children?" Breyer asked. "'Now you can't buy a naked woman, but you can go and buy that,' you say to the 13-year-old. Now what sense is there to that?"

"Why isn't it common sense to say a state has the right to say, 'Parent, you want this for your child? You go buy it yourself,"' Breyer added.

Justice Elena Kagan pointed out that many of the younger staff at the Supreme Court probably grew up playing versions of the video game "Mortal Kombat," a martial arts fighting game that allows victorious players to finish their opponents with graphically violent moves called "fatalities."

And nearing the end of arguments, Justice Sonia Sotomayor pointed out the difficulties with enforcement.

She noted that the law bans minors buying video games that show violence to people. But what if game designers make a couple of anatomical changes to the depiction of human beings, like elongating the ears?

"Would a video game that portrayed a Vulcan as opposed to a human being, being maimed and tortured, would that be covered by the act?" Sotomayor asked.

Morazzini said those games would then be legal to sell to children.

Roberts suggested that the court might find a compromise like it did with "crush videos" showing animal deaths. He said the court struck down that ban in a way so that a new, narrower law might be legal.

"Why isn't that a good approach here?" Roberts asked.