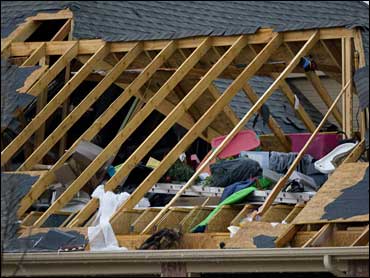 The hardest hit area is a mobile home park, where no tornado shelter was available for residents to take refuge. It is there where most of the victims died, reports CBS News correspondent Hari Sreenivasan. There were also miraculous tales of survival. People huddled in a closet grabbed a woman and snatched her down after the tornado blew part of the roof off and threatened to carry her away. Rescuers found one woman injured but alive under an overturned mobile home.

The 28-year-old Beatty is a survivor. He heard the sirens but could not escape. He broke his hip, his wrist, and suffered deep cuts to his head. Worst of all, Sreenivasan reports, one of the women sharing his trailer was swept away and killed.

"This is the worst thing I ever went through," he says.

Seasoned storm chaser Brad Patrick was out tracking the twister when he got too close.

"It was total pitch blackness, it was very hard to see that tornado," Patrick says.

Patrick was so close that the instruments on his vehicle measured the storm's fury at 133 miles per hour.

"It may as well have had teeth and eyeballs because it was a big scary monster is what it was," Patrick says.

It was part of a monster storm system that brought rare February tornadoes from Mid-Texas all the way up to northern Oklahoma, the third year in a row that February storms have turned deadly, Sreenivasan reports.

"It is unusual to have an outbreak of tornadoes this early in the severe weather season, but it is not unheard of especially in the southern most reaches of the country," says Eric Wilhelm, senior meteorologist with AccuWeather.com.

The tornado carved a path of destruction, demolishing or damaging homes and businesses throughout Lone Grove, a town of 4,600 about 100 miles south of Oklahoma City.

Gov. Brad Henry, who arrived in the area by helicopter Tuesday, declared a state of emergency in 17 counties for the severe weather that raked the state Tuesday. The declaration allows the state to make emergency purchases to speed aid and begins a formal federal assistance process.

"The devastation literally takes your breath away," Henry said. "It literally looks like a war zone.

"But on the flip side of that, it's amazing how many survived. In some way, this area was blessed by God."

This was one of a cluster of unusual February twisters that touched down in Oklahoma Tuesday. A half-dozen homes, an apartment complex, and several businesses were also damaged in the central Oklahoma cities of Edmond and Oklahoma City, but no serious injuries were reported there.

Firefighters methodically searched each damaged or destroyed structure in Lone Grove. They spray-painted a large X on damaged homes after inspection and residents were then allowed to check for belongings.

Shirley Mose was not at home when the tornado struck, but returned Wednesday morning with members of her family to find the house destroyed and her pickup truck wrecked.

"I had a little Chihuahua that stayed in there," Mose said. "We found her bed, but not her. I guess she's gone."

Residents apparently had good warning of the approaching twister.

The National Weather Service issued a tornado warning, meaning a tornado is imminent and residents should take shelter, at 6:50 p.m. for Carter County. Another was issued at 7:15 p.m. when the actual tornado was spotted. The tornado hit Lone Grove at 7:25 p.m.

He said there were a total of 50 injuries. Sheriff's deputy David Gilley said between 100 and 150 homes were destroyed. A number of people were unaccounted for but were believed to have left the area or temporarily moved in with friends or family.

All that was visible of the mobile homes Wednesday were the cinder blocks they sat on. Trees were uprooted or snapped in half, cars were flung around like children's toys, hoods of vehicles were ripped off. Debris was everywhere.

Cherokee Ballard, a spokeswoman for the state medical examiner's office, said some of the victims appeared to be inside their homes when the tornado hit, while others were outside. A trucker driving through town was killed when the winds slammed his rig.

"The majority of the deaths appeared to be blunt force trauma to the head," she said.

Some were apparently hit by flying objects, in one case a flying pickup truck.

"One victim was found underneath a pickup truck the tornado had lifted and dropped on him," Ballard said.

Surveying the wreckage, Wade Talieferro, whose uncle lives near the path of the tornado, pointed to an area where six mobile homes stood.

"They're all gone," he said. "I found a dead body in the pasture last night. It's a heck of a bad deal."

Lone Grove residents woke up Wednesday to scenes of destruction. Along U.S. 70, the main road into town, a furniture store had been destroyed along with some other nearby homes and businesses. Debris was lodged in high power lines.

Trees were splintered, roofs were missing, many power lines were on the ground and power was out. Several utility poles were snapped, their transformers hanging upside down. Debris littered the ground.

Trina Quinton stood next to a pile of rubble that used to be John's Furniture, her cousin's business, and wondered whether her family will ever recover from the storm.

"I'm grateful that the business wasn't open and they weren't here.

"This is how they make their living, rebuilding is probably not going to be an option."

Joe Hornback, 42, said the roof was blown off a post office a few blocks from his home.

"We were very fortunate," he said. "We went into the only cellar on our block. There were 30 of us in a 6 by 6 underground cellar."

He said there was a calm before the tornado hit.

"Then you just heard the wind blow, just like you turned the light switch on."

Lana Hartman rode out the storm with seven other people in a small clothes closet of the rental house she moved into on Monday.

"We were all in the closet, the suction was so unreal," Hartman said.

The tornado blew part of the roof off the house and lifted one of her grown daughters into the air. Everyone grabbed the woman to keep her from flying off.

"I was in shock, I think I still am," Hartman said. "We're alive, that's all that matters."

A twister also touched down in the Oklahoma City metropolitan area before moving into Edmond. Only three minor injuries were reported.

In Edmond, a half-dozen homes were damaged, an automobile body shop was destroyed, among other damage.

Some 26,000 customers of Oklahoma Gas and Electric lost power after the central Oklahoma tornado, but power was restored to most within several hours. A few thousand customers remained without power in southern Oklahoma.

Another tornado was reported in Pawnee County in north-central Oklahoma. Nobody was injured in that storm.

Tornadoes are most numerous in Oklahoma in the spring, but can occur at any time, National Weather Service meteorologist Rick Smith said.