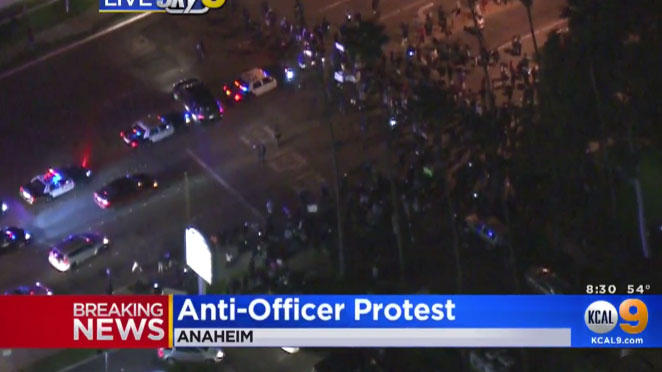 ANAHEIM, Calif. – Scores of protesters clashed with police on the streets of Anaheim Wednesday night as they called for the arrest of an off-duty Los Angeles police officer who was caught on video firing his gun during a confrontation with teens outside his Anaheim home Tuesday afternoon, reports CBS Los Angeles.

Anaheim police report about 24 arrests for misdemeanor charges including failure to disperse.

Hundreds of protesters gathered at 7 p.m. near Disneyland, bringing traffic to a standstill in the busy area for hours. Anaheim police advised the public to avoid the area as officers in riot gear were deployed.

At one point, one man shoved two officers and was shot with a less-than-lethal beanbag, the station says.

The protesters also threw rocks at the home of the LAPD officer, spray-painted his garage and scratched a pickup truck in the driveway, CBS Los Angeles reports, adding that some protesters mistakenly tagged another home in the neighborhood, wrongly thinking it belonged to the LAPD officer.

A bystander captured Tuesday’s confrontation on video with a cellphone, the station says.

There have been “ongoing issues with juveniles walking across the officer’s property,” according to a statement from the LAPD.

CBS Los Angeles reports the route is popular with kids who use it to go to and from three schools.

The video shows the unidentified officer firing a single round during the off-duty tussle with a 13-year-old boy, identified by CBS Los Angeles only by the name Christian.

No one was injured but Christian and another teen were arrested after the incident.

Christian apparently believed the officer had cursed a teenage girl who walked across his lawn Tuesday, the Los Angeles Times reported.

That’s when the 13-year-old spoke up, a witness said.

Christian himself told CBS Los Angeles he had said he would sue (not shoot) the officer for manhandling him.

The video posted on YouTube shows the officer struggling with the boy, who repeatedly denies he threatened to shoot and at one point says “Let me go. … I’m only 13.”

Other teens, many wearing backpacks, are watching. The officer, who is gripping the boy’s hoodie, hauls him over the lawn, still struggling and protesting.

A taller youth steps in and tries to break the officer’s grip. Another youth rushes the officer and he stumbles back through a small hedge, still holding the 13-year-old.

The taller boy then takes a swing at the officer. Other teens approach and the officer - still gripping the 13-year-old with one hand - pulls a gun from his waistband, crouches, and a shot is heard.

Witnesses said the officer “did not discharge the gun toward anyone,” Anaheim Sgt. Daron Wyatt told CBS’ KNX-AM radio.

Most of the teens back away but the 13-year-old continues to resist until police arrive. The off-duty officer puts his hands up and is walked away to be interviewed while the teenager eventually is handcuffed.

Anaheim and Los Angeles police were investigating the incident and the officer was cooperating, Wyatt said.

A statement issued by the LAPD said the officer is on administrative leave while the police chief and others determine whether his “use of deadly force complied with LAPD’s policies and procedures.”

The video of the incident doesn’t show the entire confrontation, Wyatt said. He warned people against “rushing to judgment.”

The Anaheim Police Department said it was aware of “numerous videos” posted on YouTube. The department said its Homicide Detail is investigating and when it is completed, the case will be submitted to the Orange County district attorney’s office.

That office will decide whether any criminal charges should be filed.

Anaheim Mayor Tom Tait said in a statement Wednesday that he was concerned with what he saw in the video, and the city is committed to a full and impartial investigation.

The American Civil Liberties Union said in a statement that the video was deeply disturbing, and said investigators need to explain why the boys were arrested, but not the officer who fired the shot.