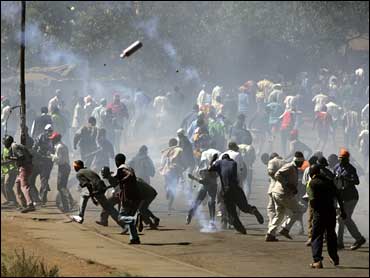 Kenya's attorney general is calling for an independent body to verify the results of last week's disputed election. The demand came as riot police used tear gas and water cannons to push back crowds headed for a protest rally in Nairobi that was later called off.

Kenya's electoral commission said President Mwai Kibaki had won the Dec. 27 vote, but rival candidate Raila Odinga alleged the vote was rigged. The dispute has triggered ethnic violence across the country that killed 300 people and displaced 100,000 others.

As attempts at mediating the crisis gained momentum, Kibaki said he was willing to hold talks.

"I am ready to have dialogue with concerned parties once the nation is calm and the political temperatures are lowered enough for constructive and productive engagement," Kibaki said, hours after police halted the planned march by opposition protesters.

CBS News reporter Katherine Arms says Odinga's party postponed a "million-man" demonstration against the government in central Nairobi until Jan. 8, a move that likely had much to do with the intervention of South African Nobel peace laureate Desmond Tutu.

Tutu was meeting with Odinga at his headquarters when security forces surrounded the compound, preventing either man from leaving, reports Arms.

"We are a peaceful people who do not want violence," said William Ruto, a top official of Odinga's party. "That is why we are peacefully dispersing now."

Police and demonstrators clashed in various points of Nairobi as youths waving white cloths and branches - symbols of peace - desperately tried to get to Uhuru Park, where the rally was to be held.

Arms reports that one of the biggest hotspots was outside the Kibera slum, where a massive group of young men played a cat and mouse game with riot police for hours. Water cannons were used on the crowd and they were forced back but would then inch forward only to be forced back again.

On the Thika Road, gathered young men were furious that police were blocking them from getting into town. On one estate youths were so angered by their restricted movement that they torched a section of bars and restaurants. Outside one of Nairobi's most expensive shopping malls youths wept in the street, begging to be let through. Minutes before, a gas station was looted and then torched.

Despite the intense clashes around Nairobi, the gigantic crowds many feared never materialized in the center of the capital city.

Four days of post-election violence has already killed at least 300 people and displaced 100,000.

Arms reported earlier Thursday that Odinga was adamant that his demonstration in Uhuru Park must go on.

Odinga called the march to protest President Mwai Kibaki's re-election in the Dec. 27 vote, insisting the poll was a sham. The political dispute has degenerated into ethnic violence nationwide pitting Kibaki's influential Kikuyus against Odinga's Luos and other tribes.

Odinga told The Associated Press on Wednesday that the rally was meant to be peaceful, but the government has banned the march.

On one main road, police fired tear gas and water cannons Thursday to push back a crowd of several hundred people from the Kibera slum holding branches and white flags symbolizing peace. Some burned an effigy of Kibaki and waved placards denouncing him as the devil.

"Without Raila there will be no peace," said one of the protesters, 22-year-old Edward Muli.

Though both sides say they are ready to talk, the Odinga and Kibaki camps have mostly traded accusations that the other is fueling ethnic violence. Odinga says he will not meet with Kibaki unless the latter concedes he lost the presidency, something Kibaki is unlikely to do.

After the roadblocks went up and her neighbors' homes were set on fire, Ruth Mwihia grabbed her 2-year-old daughter and began calling around desperately, trying to leave her town in western Kenya.

For three days they tried to reach the airport, where thousands of Kenyans are camping out, to catch a flight out of Eldoret to anywhere.

"When they closed all the routes out and surrounded us, the idea was to kill us," she said, her voice shaking. She and her sister sought sanctuary, moving from church to church, never staying for very long.

They finally managed to get themselves into a 30-car convoy, pay police to escort them to the airport and jump on a chartered flight out of Eldoret, where dozens from Mwihia's ethnic group, the Kikuyus, were burned or hacked to death in a church on Tuesday.

With Wednesday's flight, Mwihia joined 100,000 other Kenyans said to have been displaced by the tribal violence that has convulsed the country following the disputed Dec. 27 elections.

The violence began last weekend, as Kibaki, a Kikuyu, was sworn in for a second five-year term even though the opposition said his re-election was a sham and international monitors raised concerns over voting irregularities. Clashes quickly followed between Kikuyus and several other Kenyan tribes who accuse the Kikuyu of monopolizing business and political power.

"Will the whole community pay for one person's mistake?" asked Mwihia.

The U.S. ambassador to Kenya is calling both sides to speak out and bring the violence "to an end."

Secretary of State Condoleezza Rice spoke by telephone Wednesday with Odinga and had a call scheduled with Kibaki to ask the pair to resolve their differences peacefully, the State Department said.

Spokesman Sean McCormack declined to say whether the United States recognized Kibaki's victory as legitimate but said Washington had "concerns" about accusations of electoral malfeasance that must be addressed within the country's legal system.

The Kenya Human Rights Commission urged Kibaki to agree to an independent review of the disputed ballot count, saying in a statement: "Kenya will not survive this moment unless our leaders act like statesmen."

Government spokesman Alfred Mutua said clashes had only affected about 3 percent of the country's 34 million people. "Kenya is not burning and not (in) the throes of any division," he said, adding that security forces had arrested 500 people since skirmishes began.

Vice President Moody Awori said the unrest was costing the country $31 million daily. Neighboring Uganda says many gasoline stations there have shut down because of shortages of fuel, most of which is imported by road from Kenya's Indian Ocean coast.

The independent Kenya Human Rights Commission and the International Federation for Human Rights said in a joint statement more than 300 people had been killed nationwide since the Dec. 27 vote.

Confusion has surrounded the disputed count. The head of the country's electoral commission, Samuel Kivuitu, said he was pressured by both sides to announce the results quickly. The Nairobi newspaper The Standard quoted Kivuitu on Wednesday as saying: "I do not know whether Kibaki won the election."

The bitter dispute has shaken Kenya's image as a tourist-friendly oasis of stability in a region that includes war-ravaged Somalia and Sudan.