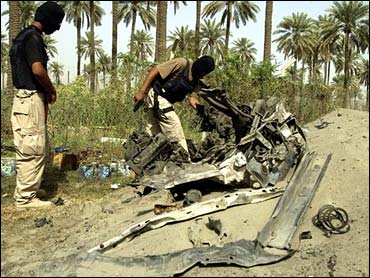 A suicide car bomber slammed into a truck Thursday that was carrying policemen along the main road connecting Baghdad with its airport, killing at least eight officers and injuring at least 25, police and hospital officials said.

The suicide bomber plowed his black sedan at high speed into a truck carrying police officers from checkpoint to checkpoint along the road about 4 p.m.

The officers were part of an evening shift that was replacing other officers at the checkpoints, said police Maj. Moussa Abdul Karim and medic Najam Abid of the al-Yarmouk hospital.

On Thursday, a U.S. general blamed Jordanian-born terrorist leader Abu-Musab al-Zarqawi for the "fantastic rise" in the number of civilian deaths in Iraq. Nearly 1,100 people have been killed since April 28 when the Shiite-led government took office.

"With Zarqawi's push recently, we certainly see the fantastic rise in the number of civilians killed, given that he has proclaimed that taking out civilians is an acceptable thing," said U.S. Air Force Brig. Gen. Don Alston, spokesman for the Multinational Force in Iraq.

Alston announced on Thursday that U.S. forces have arrested the leader of the Mosul branch of al Qaeda in Iraq, a capture that was described as a major defeat for the terrorist group. Mohammed Khalaf, also known as Abu Talha, was arrested last Tuesday, he said.

The military said that U.S. forces found Abu Talha in a quiet neighborhood in Mosul after a number of tips. Abu Talha, he said, did not go through with a reported threat to kill himself rather than fall into American hands.

"Instead, Abu Talha surrendered without a fight," Alston said.

"Talha was one of al-Zarqawi's most trusted operation agents in Iraq. This is a major defeat for al Qaeda terrorist organization in Iraq. Al-Zarqawi's leader in Mosul is out of business," Alston added.

Also on Thursday, senior members of a Shiite-dominated committee drafting Iraq's new constitution reached a compromise with Sunni Arab groups on the number of representatives the minority will have on the body drafting the charter.

The agreement broke weeks of deadlock between the 55-member committee and Sunni Arabs over the size of their representation.

The stalemate had threatened to derail Iraq's political process as it was about to enter its final stretch, with two key nationwide votes later this year — a constitutional referendum and a general election.

News of the deal was announced by two lawmakers who sit on the committee — Shiite Bahaa al-Aaraji and Sunni Arab Adnan al-Janabi. Both have led contacts with the Sunni Arab community over the size of their participation in the constitutional process.

They also attended a meeting Thursday with 70 representatives of the Sunni community over the issue.

The United States and the European Union have called for the inclusion of the Sunni Arabs in the drafting of the constitution to ensure the credibility and success of the process.

Al-Aaraji and al-Janabi said Sunni Arabs would submit a list of their candidates next week, and that parliament would subsequently issue a statement welcoming the expansion of the constitutional committee.

"It was a cordial meeting," al-Aaraji said. "They will set up a five-member committee to draw up a list of 15 candidates which they will submit to us in three days."

Because the 15 Sunni Arabs to be added are not elected members of parliament, they would join the committee's 55 legislators in a parallel body. That 70-member body would make decisions by consensus and pass them back to the 55 lawmakers for ratification.

Sunni Arabs, like the Kurds, make up between 15 percent and 20 percent of Iraq's estimated 26 million people. The Shiites are believed to be about 60 percent. The Kurds are represented on the committee by 15 members.