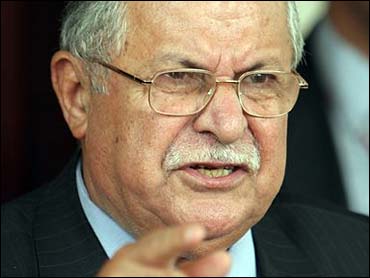 A prominent Shiite politician was killed Tuesday and more than a dozen other Iraqis were slain on the anniversary of Iraq's first year of sovereignty, a day its first Kurdish president described as being "blessed" despite the violence wracking most of his country.

Jalal Talabani said that although the anniversary of America's hand over of power and the formal end to occupation was cause for jubilation, Iraq's true day of celebration should be Jan. 30 — when people voted in their first free elections in more than half-a-century.

"This is a blessed day, which saw the restoration of independence and national sovereignty," Talabani said after a meeting with the U.S. and British envoys to Iraq, the two countries which were the driving force behind the invasion that toppled Saddam Hussein two years ago.

Separately, more than 1,000 U.S. troops and Iraqi forces launched Operation Sword in a bid to crush insurgents and foreign fighters in western Iraq, making it the third major offensive in the area in recent weeks.

The campaigns have failed to stem a Sunni-dominated insurgency that has killed more than 1,360 people — mostly civilians and Iraqi forces — since Prime Minister Ibrahim al-Jaafari announced his Shiite-dominated government April 28.

Relentless attacks since al-Jaafari's government took office have sparked an escalation of sectarian tensions and fears of civil war.