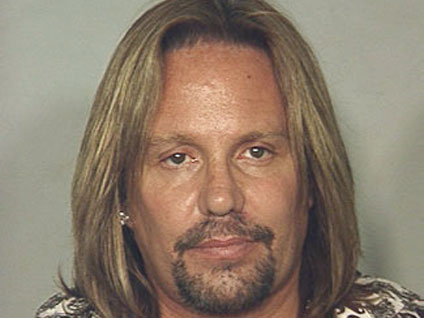 NEW YORK (CBS/AP) When Motley Crue singer Vince Neil was arrested Sunday night on drunken driving charges in Las Vegas, he was promoting a memoir in which he claimed to have stopped abusing drugs and alcohol.

The 49-year-old rocker spent the night in the Clark County jail and was released Monday after posting $2,000 bail.

In an interview last week with The Associated Press about a tell-all book due out in September, Neil said he hadn't used drugs in 20 years, and had stopped abusing alcohol.

"There's just a point in your life where you kind of stop, that's what happened with me," he said. "There's other things in life than just drugs and alcohol."

Neil said he admired the sobriety of some of the top performers today.

"Those are the guys that are doing it right," he said. "It's the ones that self-destruct with the drugs and alcohol that have gone by the wayside many years ago."

On June 22, Neil told the Associate Press, "Well, there's just a point in your life where you kind of stop, that's what happened with me. That was like three years ago. There's other things in life than just drugs and alcohol. I haven't touched drugs in 20 years. You grow out of that. Or hopefully, you grow out of it."

Neil was in his Lamborghini near the Las Vegas Stri when he was pulled over Sunday by police. . A police spokesman said additional details of the arrest would not be immediately released, and a police report would not be made available while the investigation continued. A court date is scheduled for Sept. 27.

Also from the AP interview on June 22, Neil says, "It's funny because somebody asked me, 'Is it weird being sober in a band?' and I go, 'Well, the thing is, you look at all the top bands that are still out there, most of those guys are sober."

Neil is currently working on his autobiography, due out this September. He said it will deal with the turmoil in his life.