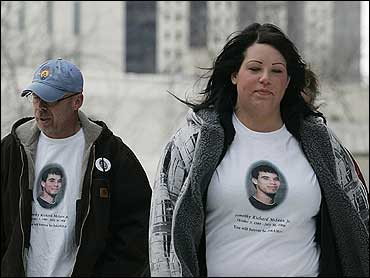 (CBS/AP) WINNIPEG, Manitoba - Vince Li, the man who beheaded and cannibalized a fellow passenger on a Greyhound bus in Canada, has won the right to be allowed to leave the grounds of the mental hospital where he is being kept, a criminal review board ruled Thursday.

The Criminal Code Review Board said Vince Li's treatment team may grant him short escorted trips into the central Canadian city of Selkirk, Manitoba. The review board said the passes will start at 30 minutes and increase incrementally to a maximum of full days.

Li was found not criminally responsible for the July 2008 death of Tim McLean, a young carnival worker who was sitting next to Li on a bus near Portage la Prairie.

McLean had his eyes closed and was listening to music on his headphones when Li, a stranger who was sitting beside him, suddenly stood up and started stabbing him. As the bus stopped and horrified passengers fled, Li carved up McLean's body and ate portions of it.

A judge was was told at Li's trial four years ago that Li was an untreated schizophrenic.

The board said the passes should only be granted if Li's treatment team believes his condition is stable and that it would be "appropriate and safe for him to leave the locked ward." He will be escorted at all times by a staff member and a security officer.

Carol DeDelley, the victim's mother, called the board's decision unacceptable and vowed to continue her efforts to fight the law dealing with people found not criminally responsible.

"My son died this way to shed light on the issue," DeDelley told reporters. "I'm not stigmatizing mental issues. If he's doing well in a controlled environment with regularly administrated medications leave him there ... but freedom for him? I don't think that should ever be an option."

Li's passes can be issued starting May 24.