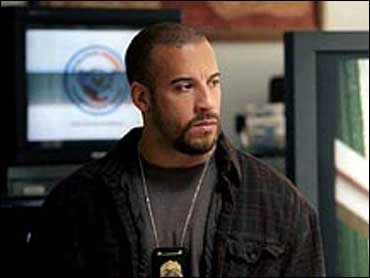 He's been called an action movie heir to Stallone and Schwarzenegger, but Vin Diesel also is a writer and a movie-maker whose early efforts debuted at the Cannes and Sundance film festivals.

The star of the just-opened "A Man Apart" talks to The Early Show Co-Anchor Hannah Storm on Tuesday's show.

"A Man Apart," about a U.S. narcotics cop who takes on a Tijuana drug cartel to avenge the murder of his wife, opened third at the box office last weekend with about $11.5 million in box office receipts, according to Hollywood.com estimates.

The Brooklyn native, now 35, has been acting since he was a child.

When early success didn't materialize, he turned to writing and making independent films. His short film "Multi-Facial" was introduced at the 1995 Cannes Film Festival. He then wrote, co-produced, directed and starred in a full-length feature, "Strays," which was shown at the 1997 Sundance Film Festival.

Diesel is becoming known for his action roles, but he says it was the emotional elements of "A Man Apart" that attracted him to the role.

"The film is so much about how this guy, a DEA agent, is coping with the reality of losing his wife, especially due to his occupation, and that's what drew me to the project," Diesel says. "The idea that it was a psychoanalytical breakdown of a cop that loses his wife."

He goes from good guy to "psycho" in the film, he says, but the story "is really about: how will this man ultimately face the reality that he is alone and without the most important person in his life?"

Make no mistake, "A Man Apart" is no romantic comedy. We asked Diesel if he'll be looking beyond action roles in the future.

"I want to do all kinds of roles," he says. "I so desperately want to do Hannibal the Conqueror; that's so exciting. I want to do 'Guys And Dolls.'"

"Guys and Dolls" might not be just a pipe dream. Diesel confirmed a Hollywood rumor that he and Nicole Kidman have talked about reviving the musical comedy classic about a tough-talking Times Square wise guy who falls for a Salvation Army volunteer.

Diesel is the son of a Brooklyn theater teacher who, he says, had to "get a real job" to support his family.

He knew he was going to be a star when he was 7, although he's reluctant to admit it now. Why? "Because I think you are supposed to be modest and humble, and I don't know if they are mutually exclusive but for me it's the truth and I really believed it and it's all I had," he says. "I would not deny that I was holding on to that as my sole support, because I started acting when I was seven years old and I didn't get paid as an actor until I was 30, until I did 'Saving Private Ryan,' and If I didn't have that confidence I would have given up a long time ago."

Those efforts have given him an unusual double role as action movie star and independent film director.

"The most important bit of advice I can give anyone," he says, is "make it happen, and be productive, and try not to live your life at the mercy of other people deciding if you can be artistic. Go out, save your money, go get a video camera and create something."