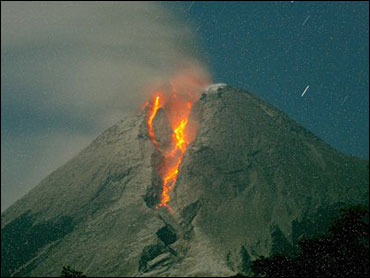 The fierce heat melted the troops' shovels and the tires of a power shovel brought in to plow through more than 6 feet of debris covering the bunker, which was built for protection from volcanic eruptions, said Maj. Sunarso, who goes by one name.

The two men have been trapped since late Wednesday when Merapi sent massive clouds of searing gas and rock fragments rolling far down its slopes.

By nightfall, the soldiers had dug away the debris surrounding the door, but found it blocked by a large hot boulder, said senior disaster official Heka, who also goes by a single name.

The operation was suspended until Friday morning.

"We have so far dug one meter deep. It's very difficult because the bunker was covered with rocks and sand," local official Suryadi told news agency AFP.

Another official said it's not known if the two men are still alive. The bunker is equipped with oxygen, but its power was knocked out by the explosion.

A gas cloud nearly enveloped one village, and ash covered another village 4.5 miles from the crater with a gray blanket an inch thick, officials said. Up to 20,000 people live in the mandatory evacuation zone.

Yousana Siagian, head of the government's Vulcanology and Disaster Mitigation Center, said Merapi spewed hot clouds as far as four miles from the volcano's crater — the farthest since the alert status was first raised to the highest level on May 13.

Mount Merapi, one of Indonesia's most dangerous and unpredictable volcanoes, has been venting massive clouds of hot gas and debris and sending lava flows streaming down its slopes for more than a month.

Activity had slowed in recent days, allowing villagers to return home. They were told to stay alert, and evacuation trucks remained on standby in each village.

"A heavy rain of ash and sand poured down on villagers," Sugiono, an official from a monitoring post at Srumbung village, said. "It's very dark and covered by smoke and ash. People instinctively came to the shelters."