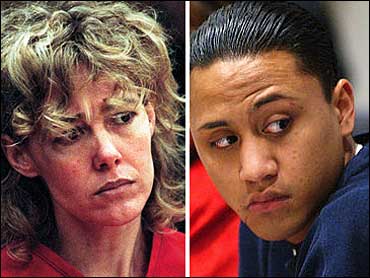 Mary Kay Letourneau, the teacher who went to prison for having an affair with a 12-year-old student, and Vili Fualaau, the pupil who is now an adult, have resumed their reslationship and hope to marry, reports The Early Show co-anchor Julie Chen.

It has been six weeks since Mary Kay Letourneau became a free woman. The former schoolteacher served seven years in prison, after she was convicted of repeatedly having sex with sixth grade student Vili Fualaau.

Fualaau and Letourneau have not spoken publicly since then, but Fualaau broke his silence in an exclusive interview with syndicated talk show host Larry Elder.It seems Fualaau, who is now 21 years old, and Letourneau, who is 42, are looking to pick up their relationship where it left off.

The couple's forbidden love affair started back in 1996, when Fualaau was just 12. The pair had met five years earlier when Letourneau was the boy's second-grade teacher.

After Letourneau became pregnant with Fualaau baby, she was convicted of child rape and sentenced to six months in prison and banned from seeing her young lover.

The six months soon passed but apparently staying away from Fualaau proved to be too difficult. Less than a week after being released from prison, the couple was caught together again. The parole violation cost Letourneau seven more years behind bars where she gave birth to the couple's second child.

In August, when she was released from prison, the judge granted Fualaau's request to drop the no-contact order and gave the couple permission to see each other again.

The Early Show aired a portion of it of Elder's interview in which Fualaau said he has seen the teacher every day since Aug. 13 and that
they planned to get temselves financially stable, work out the family court issues concerning their two children and get married.

Larry Elder gave his impressions of Fualaau to Chen:

"He doesn't seem to gasp the enormity of the situation that he's in. This is a 21-year-old young man who's got two girls, one daughter 6, one daughter 7. He doesn't work. He says he's been in and out of jobs. He wants to be a graphic designer, but he dropped out of high school and says that he wants to get financially stable, handle the family issues. By that, I assume he means get custody of his two daughters. And he wants to marry Mary Kay Letourneau."

"It will of course be left up to a judge to determine what is in the best interests but according to Vili, he has a good relationship with his mother," Elder continued. "His mother would like him to have custody of the children. Assuming he and Mary Kay get married, I can't imagine why a judge would not allow the couple to have custody of the children."

"He says he wants to become a graphic designer. He did drop out of high school. He told us he was, quote, in and out of jobs, closed quote. You can imagine the jobs you can get as a high school dropout so it doesn't seem his game plan is very well thought out. But he says he's in love. He says she's in love. They've been in daily contact since she's gotten out. As you know the no contact order was lifted... and they've even been intimate."

The interview with Vili Fualaau appears on Wednesday's "The Larry Elder Show."