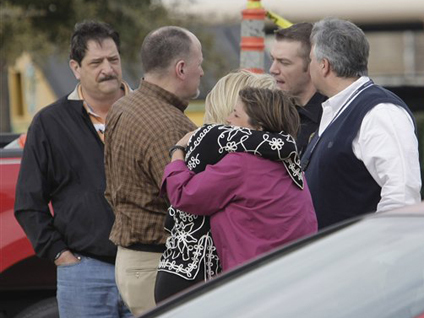 ARLINGTON, Texas - Nearly 100 people prayed, cried and sang "Amazing Grace" at a vigil Friday night outside a Texas church, a day after the pastor was killed and a ministry assistant was severely beaten in what police suspect was a robbery gone wrong.

Tears streamed down one woman's cheeks as she held a candle while pastors from several Arlington churches prayed for comfort, peace and hope. Several people placed wreaths and flowers by the NorthPointe Baptist Church doors in memory of the Rev. Clint Dobson, 28.

"Many of us are here with crushed hearts ... but we know that you are still here with us, father," said the Rev. Luis Jule, pastor of High Point Church and a member of the Arlington Clergy And Police Partnership, a group of religious leaders working closely with the police force.

Dobson also had been a member of the group, which organized the vigil.

Investigators suspect robbery as the motive, but police spokeswoman Tiara Ellis Richard declined to say what items were missing from the church and if any money was stolen. Authorities continued searching for the injured church employee's car, which was believed stolen after Thursday's crime. The woman remained hospitalized Friday.

Dobson, who had led the satellite church of First Baptist Church of Arlington for about three years, was described as a dynamic and caring pastor whose heart was even bigger than his tall stature.

"He always had a smile on his face and would hug you as you walked in," church member Lida Cummings said earlier Friday, fighting back tears. "He had joy in his heart. He will really be missed."

The young pastor of NorthPointe was a distant relative of James Dobson, one of the country's most influential conservative Christian leaders.

"The family is quite shocked," said James Dobson's assistant Becky Lane, who said the young pastor was the son of one of the elder Dobson's cousins.

Investigators were still trying to determine what time the attack occurred at the church in Arlington, a city of 380,000 between Dallas and Fort Worth. Police were called at about 4:15 p.m. Thursday after relatives of Clint Dobson and the assistant had been unable to reach either one of them and went to the church, Richard said. It's unclear who arrived first, but a friend of Dobson's saw one of the victims through a church window and the assistant's relative called 911 and had a key to unlock the building for police, Richard said.

Belinda Billings, coordinator of a neighborhood community watch group and a former NorthPointe member, told the Fort Worth Star-Telegram that the church was kept locked and the assistant would usually let her in after she rang a bell.

The Rev. Dennis Wiles, senior pastor of First Baptist Church of Arlington, said Friday that he was "just trying to get through today" and was not sure if security would be a greater concern for churches.

The Rev. Terry Bertrand, an associate pastor of First Baptist, said at the vigil that Sunday services would be held at NorthPointe because "we're not going to cower. We're going to stand strong."

Dobson grew up in the Houston area and was an all-American boy who loved playing baseball and spending time with friends, said his former pastor, the Rev. Robert Creech. Dobson decided to become a pastor while attending Baylor University and graduated from the Waco school's Truett Theological Seminary as a top student, several professors said.

In blog posts on the NorthPointe website, Dobson shared his thoughts about how God relates to everyday life.

"Often people blame God for the sadness of the world and reject any possible hope that could be spoken into it," Dobson wrote in his Jan. 17 blog. "... However, in the realities of a broken world with broken people, the ultimate hope and answer for the world is the free and perfect gift offered by the Creator. ... The nature of grace is free to all at even the lowest point of despair."

A $10,000 reward is being offered by Oak Farms Dairy for information leading to an arrest and indictment in the case.