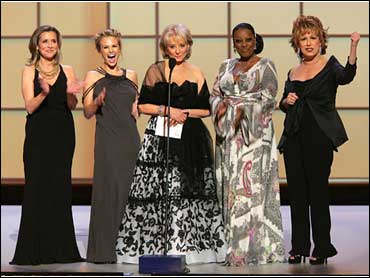 The gloves are off for the women on "The View."

Creator Barbara Walters said she was "betrayed" by Star Jones Reynolds' surprise on-air announcement of her exit from the daytime talk show Tuesday. Reynolds said in a magazine interview she felt she was fired.

Either way, the "help wanted" sign is up again at the show, months after it was announced that Rosie O'Donnell was replacing Meredith Vieira as a cast member in the fall.

Reynolds' exit had been rumored for months, intensifying Tuesday after reports on "Access Hollywood" and in the New York tabloids that an announcement would be coming soon.

Still, Walters said she was taken by complete surprise when Reynolds announced her departure after the first commercial break on Tuesday. The announcement had been planned for Thursday, she said.

"I love Star and I was trying to do everything I possibly could — up until this morning when I was betrayed — to protect her," Walters told The Associated Press.

Walters also said she wasn't aware until she got off the air of Reynolds' People magazine interview. Reynolds, one of the original cast members when the show started nine years ago, said: "I feel like I was fired."

That seems to be the case. Walters said ABC network chiefs had decided last fall not to renew Reynolds' contract because its research showed that Reynolds' dramatic weight loss and 2004 wedding to banker Al Reynolds had turned off viewers. Reynolds had been criticized for a Web site that promoted companies that donated items for the wedding party's gift bags.

"We tried to talk them out of it," Walters said, "and we tried to give Star time to redeem herself in the eyes of the audience, and the research just kept getting worse."

Reynolds' spokesman, Brad Zeifman, said the announcement had always been planned for this week. Because of all the speculation, Reynolds was compelled to tell viewers, he said.

He said he finds the notion that viewers were turned off by talk of her wedding "surprising," given that some of the top-rated shows in 2004 were related to her wedding and engagement. Reynolds' recent book in which she discussed her weight loss was a best-seller, he said.

Walters said Reynolds had known for several months that she would not be coming back, before Vieira's announcement in April that she was leaving.

"I would have loved for Star to have left and not said 'I was fired,' and not make it look like the program was somehow being cruel to her," she said.

O'Donnell's hiring had nothing to do with the decision, she said. That April announcement had led to widespread speculation over whether O'Donnell and Reynolds could co-exist. O'Donnell had made several caustic remarks about Reynolds, saying that it was dishonest for her to talk about losing more than 100 pounds through diet and exercise without talking about gastric bypass surgery.

On the show Tuesday, Reynolds told the audience that "The View" had decided to move in a new direction.

"I'm not sure what the future holds," she said. "But I'm absolutely sure who holds the future."

"Who am I going to fight with?" Behar said.

Reynolds replied: "Something tells me you will have somebody to fight with."
By David Bauder

Lovitz Speaks Out On Dustup With Andy Dick