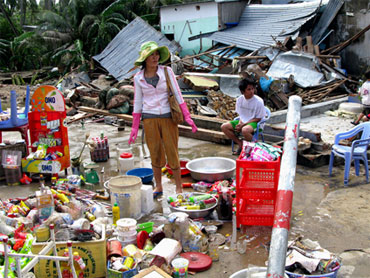 In the hardest-hit province of Phu Yen, 26 more deaths were reported as information trickled in from isolated areas, bringing the death toll there to 65, disaster official Dang Thi Lanh said. An additional 13 people were missing.

Elsewhere in the region, the storm and flooding left 26 people dead and five others missing, according to disaster officials and the government's Web site.

In Phu Yen, soldiers in dozens of speed boats rushed instant noodles, water and clothes to victims in flooded areas who have gone hungry for the past several days, Lanh said. Three military helicopters were also dropping food to victims in isolated areas.

Although flood waters were beginning to recede, many areas remain inundated.

Authorities have evacuated nearly 15,000 people from Phu Yen. Some were rescued from rooftops, where they had scrambled to escape the overflowing Ha Thanh River.

Prime Minister Nguyen Tan Dung sent a telegram late Tuesday urging local authorities to use all means to bring people still stranded to safety and provide them with temporary shelters and food, the government said on its Web site.

The storm and flooding also left 52 people injured, destroyed or damaged 14,000 homes, and damaged about 12,400 acres (5,000 hectares) of rice and other crops, according the national committee for flood and storm control.

Mirinae hit the Philippines with typhoon strength over the weekend, killing 27 people before losing strength as it moved across the South China Sea toward Vietnam.

Both Vietnam and the Philippines were still recovering from Typhoon Ketsana, which brought the Philippine capital of Manila its worst flooding in 40 years when it struck in September. Ketsana killed 160 people in Vietnam.

In the Philippines, Ketsana and two later storms killed more than 900. Some 87,000 people who fled the storms were still living in temporary shelters when Mirinae struck.