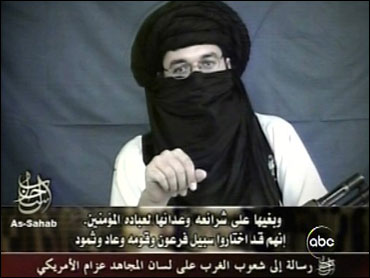 Los Angeles's police chief dismissed as "just rhetoric" a taped threat by a purported al Qaeda member that was aired by ABC News on the anniversary of the Sept. 11 attacks.

"Yesterday, London and Madrid. Tomorrow, Los Angeles and Melbourne, Allah willing," the masked man says on the tape that ABC said it received Saturday. The man — believed to be an American — speaks in unaccented English.

"And this time, don't count on us demonstrating restraint and compassion," he says on the tape, aired Sunday on ABC's "Good Morning America."

Los Angeles Police Chief William J. Bratton told The Early Show's Harry Smith that while the apparent terrorist's words are threatening, they are not specific enough to be interpreted as a real threat.

"Well, certainly ominous words. But we are not aware — 'we' being law enforcement at this time — of any clear or imminent threat directed at Los Angeles," Bratton said.

The network said the tape had been delivered to ABC in Pakistan. The man on the 11-minute tape, wearing a black turban with most of his face covered, called the attacks of four years ago "blessed events" before making the threats against the U.S. and Australian cities.

ABC said the man is believed to be Adam Yahiye Gadahn, an American from California who is wanted by the FBI. The CIA said Sunday it was aware of the report but had no immediate comment about the tape's authenticity.

Counter-terror officials believe Gadahn also may be the person on a 75-minute video given to ABC News last year in Pakistan. That tape was later deemed authentic.

Bratton said Los Angeles officials are no strangers to terrorist threats. Being one of the top three target cities in America, the City of Angels is always on guard, he told CBS News.

While no steps are planned in response to the video, he said, the city is always on the lookout for terrorists and plans heightened security measures in upcoming days because of the Jewish high holidays.

"The statement was meant to instill fear, and fear is the most potent weapon the terrorists posses," Bratton and Mayor Antonio Villaraigosa said earlier in a statement. "Bombastic pronouncements are expected on the eve of terrorist incidents like September 11, but we cannot let such pronouncements alter our lifestyles."

"The best response to things like this is to redouble our protective efforts, which we are doing, but also to get on with life, which we are also doing," said Australian Prime Minister John Howard.

In May 2004, the U.S. government announced that Gadahn was suspected of attending an al Qaeda training camp and working as a translator for the group. Investigators have said that Gadahn, who grew up on a farm in California, converted to Islam as a teen and moved to Pakistan.

A phone listing for Gadahn's father, Philip Gadahn, could not be found Sunday. Gadahn's aunt, Nancy Pearlman, said she had seen news coverage of the video but the family had no comment.

Last year Philip Gadahn said that he was baffled by the allegation his son was an al Qaeda operative, saying he has spoken to his son only occasionally in recent years but still can't imagine that he would be involved with a terrorist network.

Pakistan's Interior Minister Aftab Khan Sherpao said that authorities in his country "naturally inquire when such a tape appears, to know who delivered it or how." He said he had no information about whether Gadahn could be hiding in Pakistan.