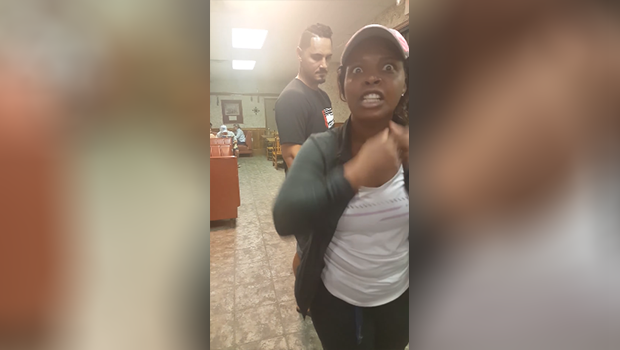 NEW CASTLE COUNTY, Del. -- A Delaware restaurant is speaking out after a profane-laced video shows a woman ranting about a veteran's service dog inside a restaurant.

In the video, a woman is seen screaming about the animal inside the business.

"I'm leaving because the food is nasty and there's a dog," said the woman in the video.

Others inside the restaurant fired back at the woman explaining that it was a service animal.

"He's alive because he fought for our country," one woman shouted.

"Congratulations… my husband's dad did too, what's your point?" the upset woman fired back.

Kathy's Crab House & Family Restaurant took to Facebook to apologize for the incident.

"We would like to express at this time how sorry we are over the embarrassing turn of events that occurred earlier this week in our restaurant, here in Delaware City," the business said. "It is unfortunate that some of the public are not familiar with federal regulations regarding service animals, which, in fact, do permit service animals into establishments such as grocery stores, public buildings and restaurants, giving aid and comfort to their masters in their time of need."

Under the Americans with Disabilities Act (ADA), a service animal is a dog that is individually trained to do work or perform tasks for a person with a disability. Generally, state and local government services and public accommodations and commercial facilities must permit service animals to accompany people with disabilities in all areas where members of the public are allowed to go.

The restaurant says they are using this incident as a learning experience by sponsoring a fundraising effort for veterans and service animals through the Montana Wounded Warriors.

"We would like to enlist your help as a sponsor, volunteer, or as a donor and help us enlighten and educate the public as well as to help those veterans in need," the business said.

The angry woman, who was reportedly inside the business with her husband and daughter, eventually leaves the restaurant before shouting off one last message for the camera recording her.

"Like I said, it's disgusting to have an animal inside of a public restaurant and if it is here it should be disclosed at a sectional area," said the woman.