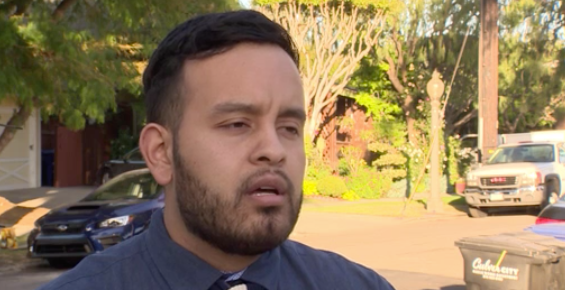 A California woman was caught on video berating a Latino man and his mother, calling them "rapists" and "animals," and later defending her remarks because President Trump "says so." Esteban Guzman, 27, was doing construction work Saturday when the incident took place.

The confrontation in the now-viral video started after some debris landed on the woman's yard in Lake Arrowhead, CBS Los Angeles reports.

"I don't know why you hate us," Guzman said as the woman holds up her middle finger at him. "Why do you hate us -- because we're Mexicans?"

When he said they are "honest people" she laughs and says, "Yeah, rapists -- and animals."

Guzman then asks how many people has he raped and how many drugs has he dealt.

"Even the president of the United States says so," the woman she said.

"You believe everything that's in the news," Guzman said. "You see we're working hard over here?"

"I see what you're doing here. You're also polluting everybody else's yard," she replied.

Guzman's mother, who is holding the camera, tells him in Spanish: "Tell her we are already finished."

Toward the end of the filmed encounter, the woman demeans Guzman and tells him, "Come here little boy."

The video was originally posted on Twitter by one of Guzman's friends, Kenidra Woods. It gained more than 55,000 retweets and 85,000 likes. She also shared pictures of Guzman graduating from Cal Poly Pomona.

"Despite what the racist white woman said -- he's not a rapist, neither does he sell drugs," Woods tweeted. "He's a hardworking man who truly inspires me."

Guzman said he was born in the U.S. and currently works as an administrative assistant. He also helps his family's construction business on weekends. Despite the incident, he said he has no anger toward the woman and instead believes this can be learning experience for her.

"I believe teaching people about our culture, about our traditions is the better way to go because that way they can better understand somewhat of a background of where we are coming from and who we are," Guzman told CBS Los Angeles.

In 2015, then-candidate Donald Trump infamously kicked off his presidential campaign by saying, "When Mexico sends its people, they're not sending their best.They're bringing drugs, they're bringing crime. They're rapists. And some, I assume, are good people."