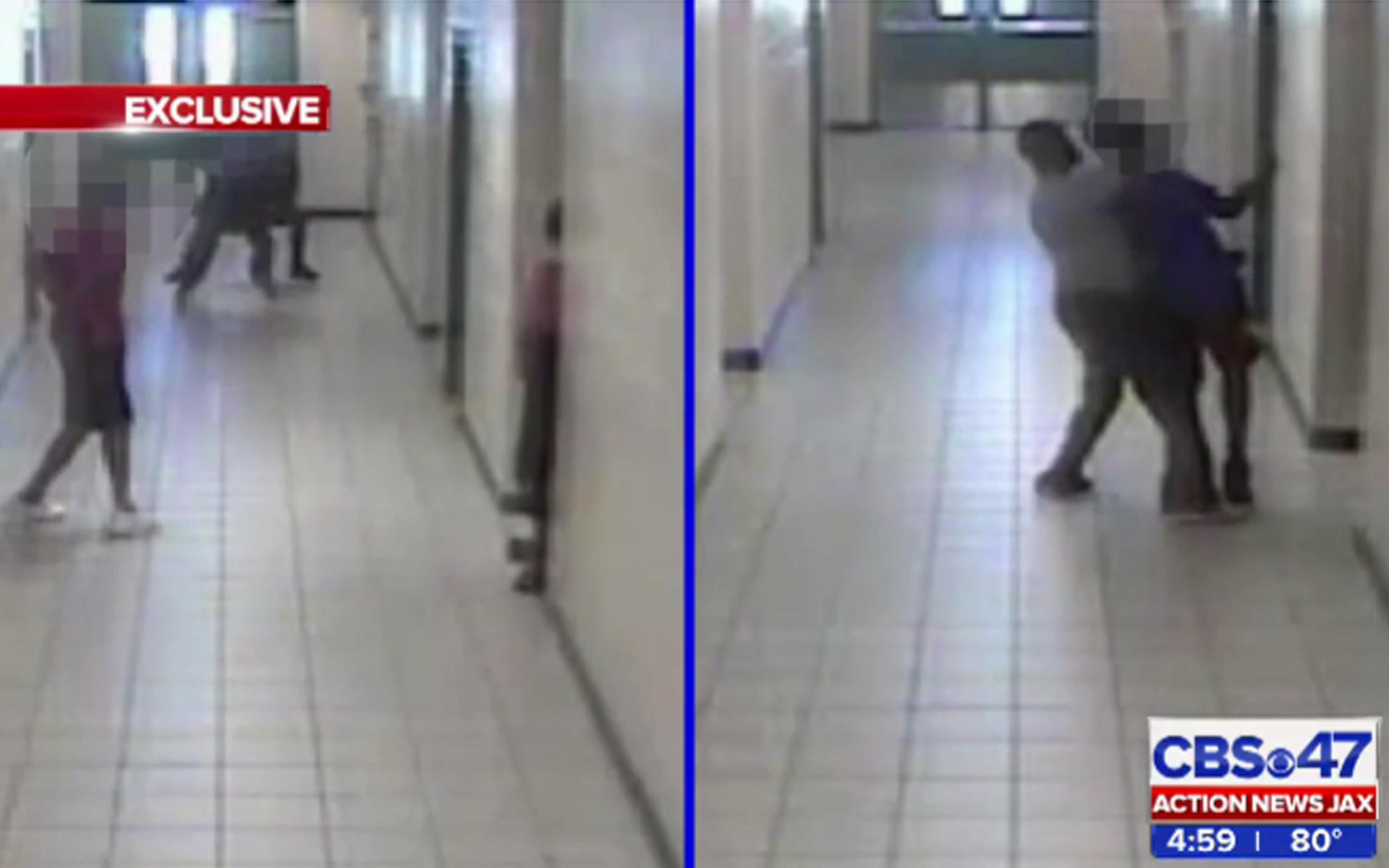 It took four months of public records requests for WJAX-TV to get the video from the State Attorney’s Office.

The incident occurred in a hallway of the Arlington Middle School’s building for students in the Emotional or Behavioral Disability program.

The affidavit for Robert Fields’ arrest warrant said the two students he scuffled with were 13 and 14 years old.

Court documents say that on Dec. 9, 2015, Fields was trying to take a football and basketball from the boys after they disobeyed their substitute teacher and went outside to play.

While what was said in the hallway can’t be heard, the video appears to show that the boys didn’t get physically aggressive toward Fields until after he’d tackled them to the ground.

Twice, a boy wearing a blue shirt was walking away when Fields grabbed him.

The second time, Fields put the student in a chokehold from behind and dragged him to the ground.

“Wow, that’s really dangerous … to grab somebody by the neck from behind. I mean, that’s pretty serious use of force right there,” said criminal defense attorney Chris Carson. “You hate to see force like that used on kids unless it’s absolutely necessary, and really I don’t know that it looked that way in that situation.”

The other boy, wearing a red shirt, was arrested on the spot.

Two days after the scuffle, the mother of that student complained to the district, saying Fields “choked her son and banged his head against the wall.”

WJAX reported in June that two school resource officers, Sgt. Leslie Sams and Officer Ryan Goethe, were punished for not conducting a thorough investigation of the scuffle.

The school police report said the boy who was charged would not have been arrested if the officers had actually watched the surveillance video.

Charges against the boy have been dropped.

Four months went by before Fields was arrested in May.

Fields was originally charged with felony child abuse, but was able to plead that down to a misdemeanor battery charge.

He was sentenced to one day in jail and a year of probation.

The Filing Decision Form obtained by WJAX from the State Attorney’s Office said there wasn’t enough evidence to prove the boys were actually injured, physically or mentally.

The form shows the mothers of both boys agreed to Fields’ downgraded charge.

“If you have someone who lacks a prior criminal record, someone who maybe has done some other good things with their lives, sometimes that mitigates a charge to a point that it’s not necessary to keep it in felony court,” said Carson.

Fields now works for Century Ambulance, according to his Facebook page.

When WJAX called to get Fields’ side of the story, he said he wanted to speak to his attorney first, then didn’t return the station’s call.