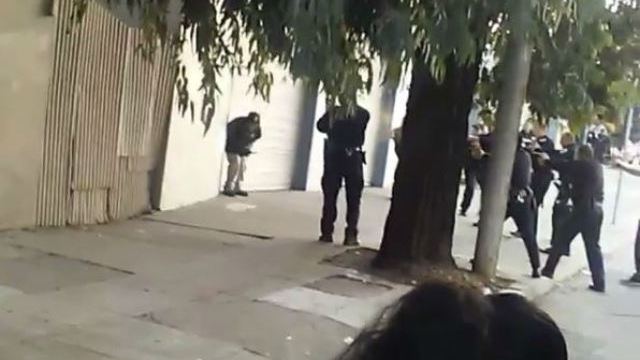 SAN FRANCISCO -- Community activists and San Francisco's public defender questioned Thursday the police response to reports of a stabbing that ended in the suspect's fatal shooting, which was partially captured on video by a bystander.

Police fired after it appeared the San Francisco man was approaching an officer, Andraychak said. Police were responding to a stabbing report in the city's Bayview neighborhood about five miles south of downtown. The area is plagued by gang violence.

A 15-second video clip circulating online shows a man bent over and holding his left hip with his left hand as he is surrounded by at least six police officers with their guns drawn.

He is seen standing up and gesturing to police before starting to wobble away from the officers. It's unclear from the video if he's holding a knife.

A woman standing in front of the person recording the video can be heard shouting "Just drop it! Just drop it, please!" The man continues walking away as one officer steps in front of him, walking backward while pointing his gun at him.

Seconds later the camera turns away as what sounds like at least 15 gunshots are fired amid bystanders' screams.

Police said Woods stabbed a man about an hour before the shooting.

"There could have been other ways to subdue him," said Chris Richard, a community activist who is organizing public meetings with police to discuss the shooting.

In 2009, when Woods was 19, a San Francisco Superior Court judge added him and five other men to one of the city's civil gang injunctions targeting a Hunters Point criminal street gang known as the Oakdale Mob, according to the city attorney's office.

City Attorney Dennis Herrera said in 2009 that Woods and the other men "have engaged in an alarming pattern of gang violence and criminal conduct in a short span of time, and their addition to the existing injunction is clearly warranted."

The city attorney's office said in a 2009 statement that Woods was "an active member of Oakdale Mob whose gang related activities include armed robbery and attempted armed robbery; shooting incidents; weapons possession offenses; and driving a stolen car."

The next year, Woods pleaded guilty to robbery and participating in a gang and was sentenced to seven years in prison, according to San Francisco District Attorney spokesman Alex Bastia

The shooting and killing of Woods was the third fatal police shooting in San Francisco since two police officers shot and killed a man in October after they said he allegedly grabbed one of the officer's guns. The officers were responding to reports of a man throwing bottles in the street near a downtown construction site.

San Francisco police officers also shot and killed a man last month who was allegedly perched atop a six-story building with a stolen shotgun.

Adachi said the video clip from the Woods shooting "raises questions whether it was necessary for the officers to shoot."