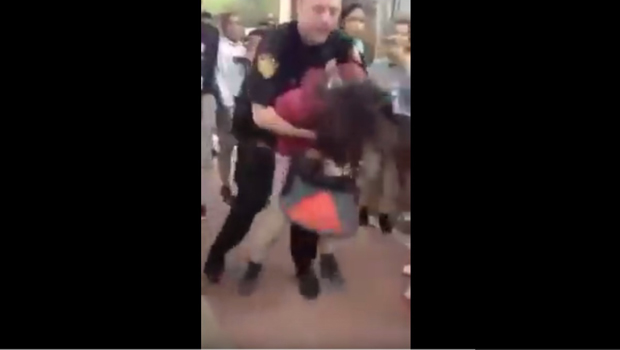 In the video, a uniformed officer is seen struggling with a girl, then slamming her to the ground. The officer appears to handcuff the girl before having her stand and leading her away.

"Supposedly he was threatened by her that she kicked him, but in the video her legs never went up," Valdez said.

Valdez's daughter did not want to go on camera but told KENS that she was having a conversation with another girl when a crowd surrounded them. She said that's when the officer put his hands on her.

"All he had to is grab her and put her to the side," Valdez said.

A spokeswoman for the San Antonio Independent School District said the officer has been placed on paid leave.

The district did not identify the officer or the student. The person who posted the video said the officer was Joshua Kehm.

"This video is very concerning, and we are working to get all of the details," Price told the newspaper. "We certainly want to understand what all occurred, and we are not going to tolerate excessive force in our district."

Valdez said the force was so powerful it knocked her daughter out.

"She was, I guess, unconscious. She doesn't remember being arrested with handcuffs," Valdez noted. "[She's] bruised because of how she was hit on the cement."

Valdez just hopes something good will come out of this

"I just want justice for my daughter," Valdez said. "How do we know this officer won't do it again to another student."