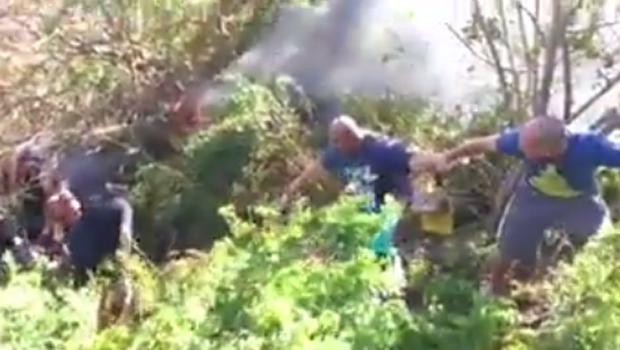 Dramatic cellphone video captured a group of good Samaritans forming a human chain to rescue a driver from a burning SUV in Florida.

Witnesses told CBS affiliate WKMG that a red Jeep Cherokee rear-ended another car and drove into an embankment on Sunday in Palm Bay.

Witness Tom Sais and a group of others got to the vehicle as it was burning.

“Start climbing on through and there he was up in the air, hanging still strapped into his seat belt, hanging sideways,” Sais told the station.

Shortly after police arrived on scene with fire extinguishers, the driver was pulled out of the car. The group then formed a human chain to get the driver to the top of the embankment.

“Grabbed onto his belt, kind of pushing him, kind of hanging onto him, dragging this guy with whatever we had and made it up to the top,” Sais said.

Sais told WKMG that Palm Bay police had to Taser the driver, who was resisting help. The man was hospitalized with minor injuries.

Shannon Perez captured the video on her cellphone.

“I think it’s good that the police get, you know, some coverage of how they are heroic and they save lives, and I think that’s amazing,” Perez told WKMG.