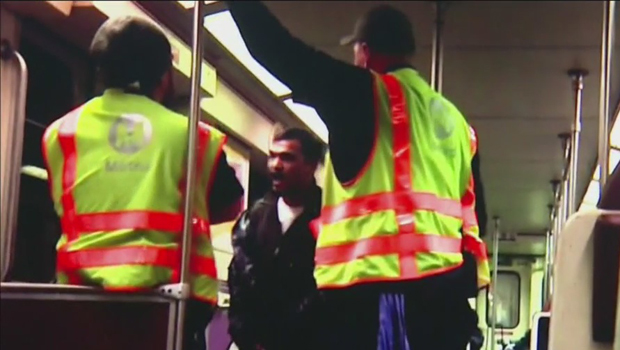 Passenger Karla Cervantes told CBS Los Angeles she recorded cell phone video of the incident as she rode north on the Red Line from Downtown LA about 12:30 a.m.

"We were just scared of him, 'cause we didn't know what to expect," Cervantes said. "We didn't know if he had a gun or anything."

Cervantes said the man was verbally threatening passengers for as long as 45 minutes.

"If you can buy a gun right now, you... should," the man said. He also invoked ISIS at one point.

Men in Metro vests attempted to calm the man down but waited for a while before calling for backup, Cervantes said.

She said sheriff's deputies weren't called until the train was just a stop from the end of the line in North Hollywood. She tried calling 911 herself, but had no service underground.

Metro told CBS Los Angeles it is working with the LA County Sheriff's Department to figure out what happened during the incident. No formal report was taken at the time.

Metro also said there are deputies at every station but not on board every train.