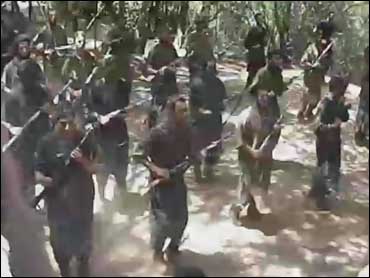 A new video has been posted on militant Islamist websites by al Qaeda in the Islamic Maghreb on Tuesday. The 45:39 min documentary-style propaganda video is dated April 2008 and shows about 30 men training in a tree-filled area that the group identifies as the "Martyr Abu Ibrahim Moustafa Camp."

The militants are shown training on the use of guns and RPGs, carrying out assassinations, jumping over barriers and crawling under others, using ropes to move between the trees and sitting in a circle taking notes while a trainer talks about urban warfare. Many of the trainees, as well as all the trainers, have their faces covered.

The training footage is shown along old video and audio statements by al Qaeda leaders Osama bin Laden and Ayman al Zawahri, as well as statements by the late Abdullah Azzam, who played a major role in inciting "jihad" during the Afghan's war against the Soviets.

In a section entitled "the daily life of the trainees," the trainees are shown sitting on the floor peeling vegetables and putting them in a large pot. They are also seen washing clothes, using a sewing machine and shaving their hair.

The tape is also not empty of the typical threats. A number of unidentified men read statements in which they warn "apostate leaders," in reference to Arab leaders. "There are young men who love death, as you much as you love life. I swear they are competing for martyrdom, as you compete to rule and become presidents," says one young man who is surrounded by two militants holding weapons. "The martyrdom operations (i.e. suicide attacks) are not too far from you."

Towards the end of the tape, a body wrapped in white cloth is shown. The men expose the dead man's face, a common practice by militants who want to show off someone they regard as a "martyr." The man is identified only as "Abdul Haq" and the men are later shown burying him at night.

Al Qaeda Organization in the Islamic Maghreb was operating as the Salafi Group of Preaching and Combat (GSPC) until Ayman al Zawahiri announced in a videotape released on Sept. 11, 2006 that Osama Bin Laden had approved of the group's merger with al Qaeda. The group threatens to turn into a global Jihadi group. The group has claimed responsibility for several attacks, including a number of suicide attacks in Algeria which have killed dozens.