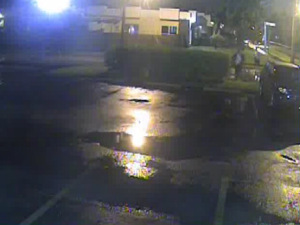 (CBS) LAUDERDALE LAKES, Fla. - Authorities are searching for two suspects who were caught on surveillance video robbing a pair of priests last month outside a church in Lauderdale Lakes, Fla., CBS Miami reports.

The Broward Sheriff's Office says Father Lesly Jean was taking a fellow priest on a tour of St. Helen Church on July 18 around 10 p.m.

According to the station, the two suspects were caught on video walking past the church and then walking around the area. Four minutes later, they are seen apparently walking back toward the church and jumping over a fence to confront the priests in the parking lot.

"You've definitely hit a new low when you'll rob two priests in front of a church and have no remorse about it," said Keyla Concepcion of the Broward Sheriff's Office.

After asking the priests if they knew the location of the nearest bank, one of the suspects then reportedly took out a gun and pointed it at the victims.

One of the priests refused to get down, or hand over his belongings, and told the suspect, "Shoot me," according to the station. He was not hurt.

"Luckily in this instance nothing happened to him, but it's definitely not something we would recommend. It's not worth you challenging an armed man and potentially losing your life over just a few belongings," said Concepcion.

The priests were robbed at gunpoint of their cell phones, money and other valuables, the station reports. The suspects then jumped back over the fence.

The video captured the suspects escaping in an SUV after the robbery. The two men reportedly jumped in the backseat, and the car sped away.

The driver of the getaway car is described as a heavy-set woman, with hair down to the small of her back. She was wearing long pants, a dark-colored shirt and a white cardigan or sweatshirt.

Anyone with any information about the incident is asked to contact BSO Robbery Detective Vincent Coldwell at 954-321-4270.

Anonymous tips can be provided to Broward Crime Stoppers at 954-493-TIPS (8477) or online at www.browardcrimestoppers.org.

A reward of up to $3,000 is available for information leading to an arrest.