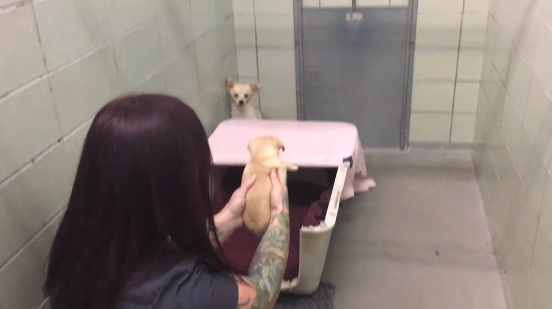 The video, posted on the Marin Humane Society's Facebook page Monday, shows a frightened dog that had been surrendered to the Humane Society, cowering in a corner. When a worker enters the enclosure and removes her puppies from a crate, the mama dog immediately recognizes them as her own, wagging her tail and fawning over them.

The Humane Society said it all began when a group of dogs were brought in Sunday. Workers determined one had just given birth and managed to track down and persuade the owner to surrender the puppies along with its mother.

As of Thursday afternoon, the original video had been viewed more than three million times, the station reported.

The Humane Society said both the mother and her litter were doing well, and since the mom's name is Cora, the puppies were named Carson, Moseley, Branson and Edith (all after Downton Abbey characters).

The dogs will be available for adoption in a few weeks, according to the station.