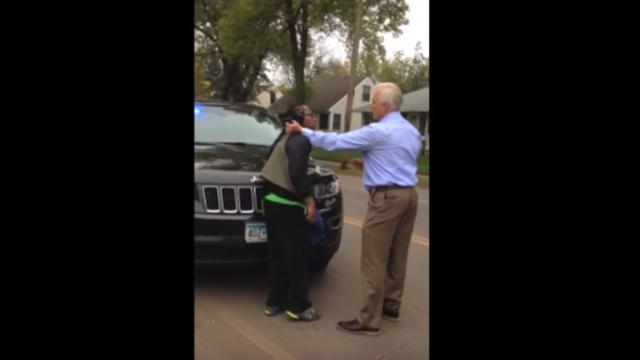 EDINA, Minn. -- A video of a black Minnesota man being detained and handcuffed apparently for walking in a street near a sidewalk closed for construction is drawing outrage on social media.

The video, posted by a bystander to YouTube, shows a plain clothes Edina police officer grabbing a man later identified by city officials as Larnie Thomas in the Minneapolis suburb of Edina Oct. 12. The video shows Thomas walking near the white line of the street’s shoulder before he’s stopped by the officer, who grabs Thomas’ arm. The bystander narrating the video can be heard saying there’s no other place for him to walk.

“What the [expletive] you want to talk to me for?” Thomas says. “I’m walking on the damn sidewalk.”

He also yells, “You can’t just put your hands on me!”

Thomas is seen taking off his coat, shirts and backpack in an attempt to get away from the officer’s grasp. The woman who is shooting the video repeatedly appeals to the officer, saying Thomas appears scared and telling the officer he could help the man instead.

“People die in these situations,” the woman says. “It’s scary.”

A second officer arrives and tells Thomas, “My partner told me you’re under arrest.” Both the woman shooting the video and a bystander claim the first officer never said the man was going to be arrested.

Thomas can be seen being handcuffed.

“You could have just shown him where to walk really kindly,” the woman shooting the video tells the officer. “You are the one that incited this.”

According to CBS Minnesota, Twin Cities rapper and activist Toki Wright took to social media Friday to express outrage over the video.

“Here’s what happened in Edina, Minnesota yesterday when a Black man decided to walk around construction that was blocking the sidewalk. This is also a perfect example of how people get murdered. #MinnesotaNice,” Wright wrote.

Former Minneapolis NAACP President Nekima Levy-Pounds said on Facebook that she was “fuming” after watching the video, the station reports.

In a statement released on social media, Edina Police say the incident started several minutes prior to the recording, when an officer saw Thomas walking in a lane of traffic “though there is a sidewalk on the east side and a sidewalk under construction and a paved shoulder on the west side of the street.”

“I observed Thomas`s actions were obstructing southbound vehicular traffic as vehicles slowed to a walking pace while stacking up behind Thomas,” the officer wrote in an incident report.

Police say the officer recognized a public safety risk, so he pulled his car behind the man with his lights and signal on in an attempt to advise him to get out of the roadway. Police said Thomas turned and looked at the officer and continued walking in the traffic lane. According to police, the officer drove in front of the man and stopped about 15 feet in front of him to block him from continuing to walk in traffic, but they say Thomas continued to walk in the driving lane and “did not stop and was defiant” when an officer got out of the car and began to follow him.

In the incident report, the officer says Thomas refused to follow his commands and described his response as “extremely confrontational.” The officer said Thomas struggled and attempted to break free from his grasp, and at one point slammed a back-pack he was carrying onto the hood of his police car.

According to police, the officer smelled alcohol on Thomas’ breath and a breathalyzer test confirmed he had been drinking.

The statement noted the right of citizens to film police encounters but warned, “it is more difficult for officers to deal with the situation on hand when they are at the same time dealing with the distractions of bystanders.”

According to the city’s mayor Jim Hovland, who also posted a statement on Facebook, Thomas was not taken to jail and was driven to a local shopping mall at his request and released. A citation issued to Thomas for disturbing the peace and disorderly conduct will be dismissed, Hovland said.

“People across the country are expressing concern about how [Thomas] was treated by the Edina Police,” Hovland said in the statement.

Hovland said the officer involved was “following established protocol,” but the city will review that procedure and “determine how to better approach this type of incident with greater sensitivity in the future.”

“We will work with the Edina community and invite other organizations to participate in this very important conversation,” Hovland wrote. “There are lessons we should and will learn from this experience.”