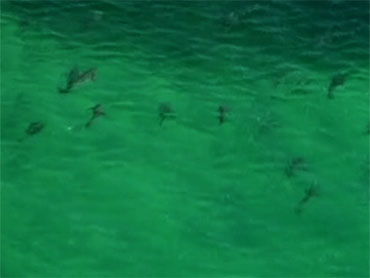 A rescue helicopter spotted a group of more than 100 tiger sharks preying on a large school of fish off the east coast of Noosa, Australia Friday.

The crew captured it all on video.

Crew members said they saw the sharks encircling, then attacking the fish in a long stretch of coastal area, according to local reports.

Some of the sharks could be seen eating their way right through the middle of the mass of fish.

There were no swimmers in the vicinity, but lifeguards nearby have been alerted to the sharks' presence.

Although sharks are known as solitary hunters, recent studies on different shark species indicate some of them follow a pattern of group hunting.