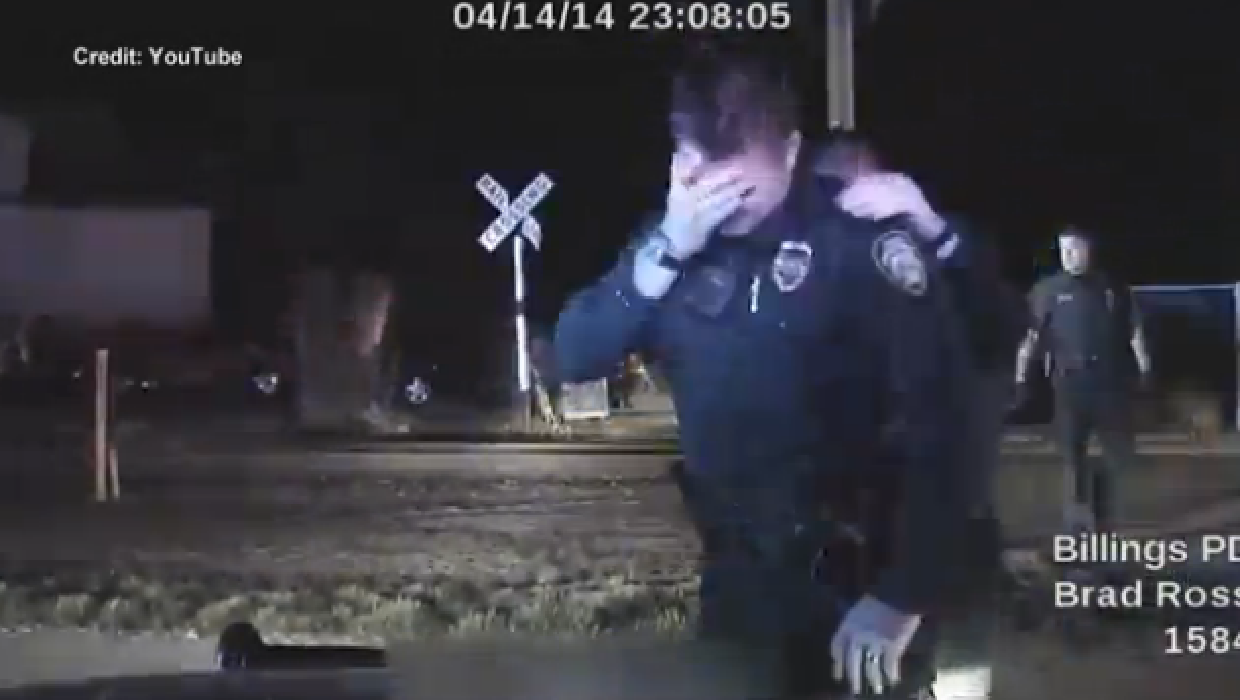 The video shows Billings Police Officer Grant Morrison sobbing and putting his head in his hands as other officers try to console him.

"I thought he was going to pull a gun on me," Morrison is heard saying through tears.

A jury at a coroner's inquest determined last week that Morrison was justified in the fatal shooting.

The ruling came after Morrison testified he feared for his life when he fired the three shots that killed 38-year-old Richard Ramirez.

The five-year police veteran said he became convinced that Ramirez had a gun after the man reached for his waistband during their 30-second encounter last April in a high-crime area of Montana's most populous city.

The seven-person jury deliberated about an hour before delivering its decision in the officer's favor.

Yellowstone County Attorney Scott Twito said he does not expect to file any charges given the jury's decision.

Coroner's inquests are mandatory under Montana law whenever someone is killed by law enforcement or dies in custody.

The inquest was held as police killings of unarmed suspects in Ferguson, Missouri and New York City have heightened scrutiny of law enforcement nationwide.

Ramirez family members said they were disappointed by the ruling and intend to file a lawsuit against Morrison and the Billings Police Department alleging excessive use of force, said Julie Ramirez, a sister of Richard Ramirez.

Billings Police Chief Rich St. John said it was the fifth officer-involved shooting in his eight years as head of the department. Each shooting was ruled to be justified, he said.

"That tells us we're doing the right thing in the right way," St. John said.

Police video showed Morrison repeatedly ordered Ramirez and other occupants of the vehicle to raise their hands. Ramirez's actions were largely obscured in the video. But Morrison said Ramirez dropped his left hand to his side - out of the officer's view - and "started to jiggle it up and down" just before he was shot.

Morrison shot and killed another man in 2013. He was cleared of any wrongdoing in that case as well.

Ramirez's family wanted criminal charges against the officer and said Ramirez was a victim of racial profiling. Morris is white, Ramirez was half-Mexican.

Another sister, Renee Ramirez, criticized the inquest as one-sided. She said testimony that her brother was a drug user was irrelevant.

All but three of the 15 people called to testify during the two-day inquest were from law enforcement. Several police officers spoke at length about their prior dealings with Ramirez and others in his family.

"I don't care what things my brother did in the past," Renee Ramirez said. "What does that have to do with shooting my brother?"

Billings Police Detective Brad Tucker, who investigated the case, testified Tuesday that Ramirez might have been trying to stash something when he was shot. A small amount of methamphetamine and a syringe were later found near Ramirez's seat.

An autopsy determined Ramirez had enough methamphetamine in his bloodstream at the time of the shooting to kill a person not accustomed to the drug, forensic pathologist Tom Bennett testified.

Prosecutor Twito defended the proceedings as a fair presentation of the facts.

"The videos speak for themselves," he said.

Morrison was placed on paid administrative leave immediately after the shooting and has since been assigned to a task force investigating prescription drug crimes, Chief St. John said.