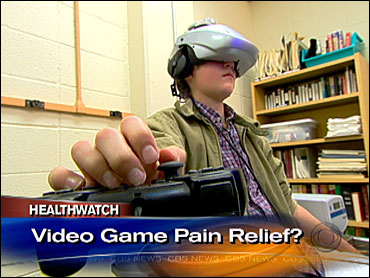 Playing video games may relieve some severe pain in some people, studies show.

Researchers have found that certain video games might even be better than pain medication.

"It can serve to distract you and give you a sense of control and some positive reinforcement," she explained.

"We know that one of the best ways to help pain is through distraction, and so when your mind is somewhere else and you can get in another world and have some fun and feel in control and a sense of mastery, it can be very useful to you."

A famous experiment had a boy in a "virtual world," with his hand in extremely cold water, but he doesn't seem to feel the pain from his hand.

"What happens is that they're distracted from the pain or other negative feelings that they're having," Kaslow said. "It may give different signals to their brain, and so they're not feeling their other distress so much, because they're focused on what's going on in the water."

What's more, "This therapy is being used with real patients. There's some evidence that it can be helpful to people with burns, for example, when they're going through dressing changes. Or children going through chemotherapy. It can help to distract them."

Kids are drawn to this type of thing, Kaslow pointed out. Generations "X" and "Y" grew up on technology and games. So, they're very comfortable with this. Kids may also be more distractable.

It's also proving helpful, she said, with patients undergoing other painful procedures and trauma patients, she said. It's also being used in cases of Post Traumatic Stress Disorder for overcoming mental pain and anxiety, and for fear of flying. It could desensitize people who anticipate or experience actual pain. "And there is some beginning suggestion that it might be helpful with more chronic pain."

How long does the relief last?

It appears, she added, that many people with chronic or severe pain would have to combine the use of videogames and medication to get long lasting relief. While playing video games may be enough for some people to get pain relief; others say it doesn't sustain them afterwards.

"We know virtual reality and video games don't have the negative side effects of pain medications -- dependence, sleepiness, forgetfulness," Kaslow responded, "but of course, videogames can be addicting, too!"

When Smith remarked, "You can just see people all over the country running around, trying to find good video games to stick in Grandma and Grandpa's stocking this year," Kaslow commented, "Well, I think that, if Grandma and Grandpa are in some pain, they may want to play some video games!"