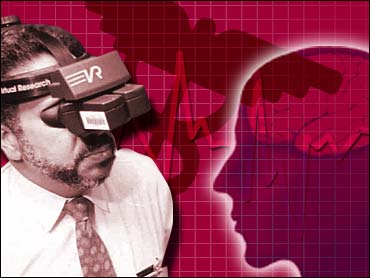 When stroke victims played virtual reality games in which they imagined they were diving with sharks or snowboarding down a narrow slope, their ability to walk eventually improved, researchers reported in a small study.

Doctors called the findings promising, especially since the patients had all had strokes more than a year earlier, a time frame when further recovery is unlikely.

"People love to play games," said study co-author Dr. Mark Hallett, and the virtual reality therapy helped the patients use their weakened legs and ultimately walk better. Hallett is chief of the human motor control section with the National Institute of Neurological Disorders and Stroke.

While the study size was small and the volunteers relatively young — 10 stroke victims with an average age of 57 — the researchers believe video games may be a good way to keep patients engaged in therapy.

About 700,000 people each year experience a new or recurrent stroke, which often impairs one side of the body and walking ability.

"This was a group of people that you would not expect to improve, and that's what made it interesting that they did," said Dr. Robert Felberg, director of the stroke program at Ochsner Clinic Foundation in New Orleans.

The three games in which the patient's body is superimposed into the scene were used to build a range of motion, balance, mobility, stepping and walking skills. One game simulated going up and down stairs, another let the patient go deep-sea diving with sharks and the third recreated snowboarding by simulating gliding down a narrow slope, jumping and avoiding obstacles.

The five patients who played the games improved in walking, standing and climbing steps, researchers said. Also, brain imaging done before and after the experiment indicated a reorganization of brain function after the therapy, said lead author, Sung H. You, assistant professor of physical therapy at Hampton University in Hampton, Va.

"It doesn't show that virtual reality is any better than any other intervention," said Dr. Allen Brown, medical director of brain rehabilitation at the Mayo Clinic in Rochester, Minn.

And neurology professor Dr. Lawrence Wechsler, director of the University of Pittsburgh Medical Center Stroke Institute, said, "I think it's too early to make any conclusions about virtual reality therapy. It looks promising and I would say it's something that we'd continue to investigate."