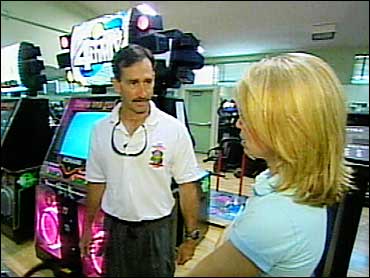 It isn’t the same old gym class any more. Now, kids weigh more and move less, so a California school has tailored its physical education program to students who would rather play a video game than chase a ball. It's fun, effective, and it's probably nothing like any gym class you've ever seen. CBS News Correspondent Tracy Smith reports for The Early Show’s Kids Connection series.

To some educators, physical education programs have fallen short, fitness scores have been trashed and student interest in physical education is slipping. But at Patrick Henry Middle School near Los Angeles, there is a PE class kids can't wait to get into.

There, it's all about equipment. Some of it is familiar: no pain, no gain.

But there are machines that kids fight to get on. It's Dance Dance Revolution or DDR. The concept is simple: follow the lighted arrows with your feet.

Never mind the bells and whistles. It's still a workout.

Now, instead of making kids exercise, the coach's challenge is to get them to stop.

"They just don't want to leave it alone. It's addicting. But it's a good exercise for them," says coach Chad Fenwick.

So how many calories will kids burn with these machines?

"This is compared to a stairmaster or jogging, you can burn just as many calories," says coach Fenwick. "This is a big video game, except you have to use your feet instead of your thumbs."

So the kids really work up a sweat. They work on this fancy equipment once a week.

"I always hope 'please let there be DDR today'," says one student.

The biggest dance machine fans are kids who used to dread PE.

"My waistline has gone down by one inch," says another.

The machines, which cost the school as much as $8,000 apiece, are free to students during class. At lunch or after school, it's 25 cents a dance.

J.P. has a $5-a-day habit. He says if it were not for the machine, he would be spending his time eating.

Now, he spends his lunch time, and money, playing the game. And he can feel the difference.

The machines also teach things like balance, timing, and coordination. But some people learn faster than others.

It takes a lot of practice. And for sedentary students, that's the point.

"The key is to get them interested in getting physically fit and staying that way for life. It's what it's all about," says coach Fenwick.