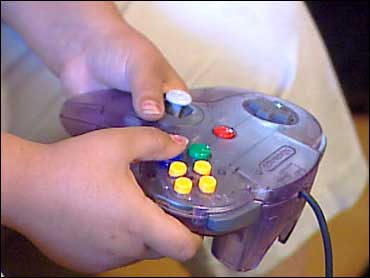 Phil Anton, age 17, loves video games, but he has never let them get in the way of school or sports. Still, there is growing concern that not everyone knows when to stop, reports CBS News technology correspondent Daniel Sieberg.

The telltale signs are ominous: teens holing up in their rooms, ignoring friends, family, even food and a shower, while their grades plummet and belligerence soars.

The culprit isn't alcohol or drugs. It's video games, which for certain kids can be as powerfully addictive as heroin, some doctors contend.

A leading council of the nation's largest doctors' group wants to have this behavior officially classified as a psychiatric disorder, to raise awareness and enable sufferers to get insurance coverage for treatment.

In a report prepared for the American Medical Association's annual policy meeting starting Saturday in Chicago, the council asks the group to lobby for the disorder to be included in a widely used mental illness manual created and published by the American Psychiatric Association. AMA delegates could vote on the proposal as early as Monday.

It likely won't happen without heated debate. Makers of video games scoff at the notion that their products can cause a psychiatric disorder. Even some mental health experts say labeling the habit a formal addiction is going too far.

This weekend, the AMA will debate the report, which warns in particular about online games involving role-playing and never-ending quests — games like World of Warcraft, Everquest, or Final Fantasy, Sieberg reports.

Dr. James Scully, the psychiatric association's medical director, said the group will seriously consider the AMA report in the long process of revising the diagnostic manual. The current manual was published in 1994; the next edition is to be completed in 2012.

Up to 90 percent of American youngsters play video games and as many as 15 percent of them — more than 5 million kids — may be addicted, according to data cited in the AMA council's report.

Joyce Protopapas of Frisco, Texas, said her 17-year-old son, Michael, was a video addict. Over nearly two years, video and Internet games transformed him from an outgoing, academically gifted teen into a reclusive manipulator who flunked two 10th-grade classes and spent several hours day and night playing World of Warcraft.

"My father was an alcoholic ... and I saw exactly the same thing" in Michael, Protopapas said. "We battled him until October of last year. We went to therapists, we tried taking the game away.

"He would threaten us physically. He would curse and call us every name imaginable," she said. "It was as if he was possessed."

When she suggested to therapists that Michael had a video game addiction, "nobody was familiar with it," she said. "They all pooh-poohed it."

Last fall, the family found a therapist who "told us he was addicted, period." They sent Michael to a therapeutic boarding school, where he has spent the past six months — at a cost of $5,000 monthly that insurance won't cover, his mother said.

A support group called On-Line Gamers Anonymous has numerous postings on its Web site from gamers seeking help. Liz Woolley, of Harrisburg, Pa., created the site after her 21-year-old son fatally shot himself in 2001 while playing an online game she says destroyed his life.

In a February posting, a 13-year-old identified only as Ian told of playing video games for nearly 12 hours straight, said he felt suicidal and wondered if he was addicted.

According to the report prepared by the AMA's Council on Science and Public Health, based on a review of scientific literature, "dependence-like behaviors are more likely in children who start playing video games at younger ages."

Overuse most often occurs with online role-playing games involving multiple players, the report says. Blizzard Entertainment's teen-rated, monster-killing World of Warcraft is among the most popular. A company spokesman declined to comment on whether the games can cause addiction.

A woman in the New Haven, Conn., area who bought the game for her 15-year-old son last year, says he got hooked on it.

"Now that I look back on it, it's like I went out and bought him his first Jack Daniels," said the 49-year-old woman who didn't want her name used to spare her son from ridicule.

Dr. Martin Wasserman, a pediatrician who heads the Maryland State Medical Society, said the AMA proposal will help raise awareness and called it "the right thing to do."

But Michael Gallagher, president of the Entertainment Software Association, said the trade group sides with psychiatrists "who agree that this so-called 'video-game addiction' is not a mental disorder."

"The American Medical Association is making premature conclusions without the benefit of complete and thorough data," Gallagher said.

"I saw somebody this week who hasn't been to bed, hasn't showered ... because of video games," she said. "He is really a mess."

She said she treats it like any addiction and creating a separate diagnosis is unnecessary.

Dr. Michael Brody, head of a TV and media committee at the American Academy of Child and Adolescent Psychiatry, agreed. He praised the AMA council for bringing attention to the problem, but said excessive video-game playing could be a symptom for other things, such as depression or social anxieties that already have their own diagnoses.

"You could make lots of behavioral things into addictions. Why stop at video gaming?" Brody asked. Why not BlackBerrys, cell phones or other irritating habits, he said.


For much more on video game addiction, from the National Institute on Media and the Family, click here.

FDA warns against baby neck floats after death and hospitalization
Thanks for reading CBS NEWS.
Create your free account or log in
for more features.
View CBS News In
CBS News App Open
Chrome Safari Continue
Be the first to know
Get browser notifications for breaking news, live events, and exclusive reporting.