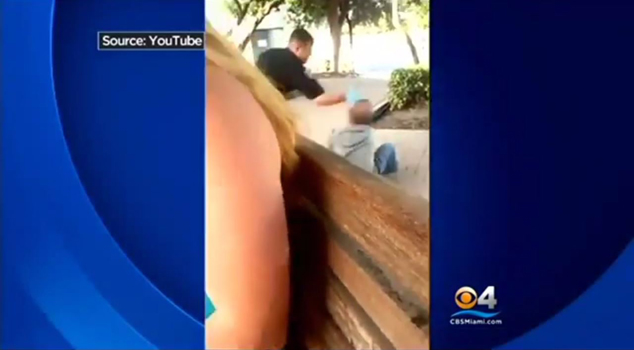 FORT LAUDERDALE, Fla. -- Police say they're looking into possible criminal charges against an officer who was videotaped pushing and slapping a homeless man at a bus terminal.

The incident happened Monday, and the video soon surfaced on YouTube. Officer Victor Ramirez, a nine-year veteran of the Fort Lauderdale Police Department, has been suspended with pay.

The video shows the officer holding the man's arm, then pushing him to the ground. The officer tells the man to get up and slaps him in the face. Police identified the man as Bruce Laclair. He was charged with trespassing and pleaded no contest, according to CBS Miami.

Police Chief Frank Adderley said Tuesday that in addition to looking at possible charges, the department will review its use-of-force policy.