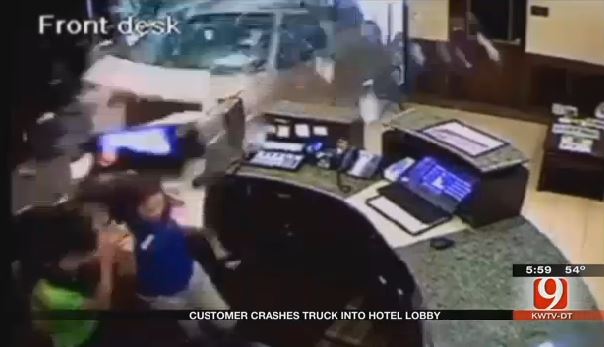 ALVA, Okla. - A man shown in a surveillance video crashing his pickup into the front desk of a northwestern Oklahoma hotel and nearly hitting two women is facing charges.

Officer Wade Suffon says he offered to talk to a manager but Parsley drove off and crashed into the hotel.

The video shows the truck back up after the initial hit and slam into the lobby again.

Parsley faces two felony counts of assault and battery with a dangerous weapon and one count of malicious injury to property over $1,000. It's not clear if he has an attorney.

Rupal Christian, who runs the hotel with her husband, told KWTV she voided the bill that he disputed, but that wasn't enough for Parsley.

"He said 'I'm going to call the cops and I'm going to run you over,'" Christian recalled.

She said the truck missed her by mere inches.

"I don't know how I jumped that," Christian said. "It's just God's hand. It's just the Angel of the Lord protected me."

Police arrested Parsley on a complaint of assault with a weapon. According to police reports, he told officers what he did because he thought Christian believed he was bluffing.