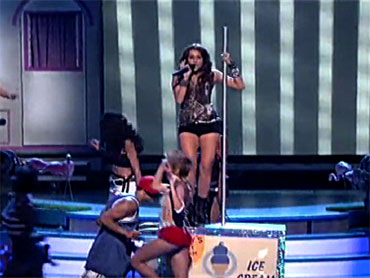 A video that's surfaced of Miley Cyrus smoking from a glass bong has fans and experts alike buzzing over how much of a hit, if any, the teen star's image and career will take.

The home video, posted by TMZ.com, was taken last month, just days after Cyrus' 18th birthday, according to the gossip web site, which quotes sources as saying the bong contained the herb salvia, a hallucinogenic drug made from a plant in the mint family and legal in many states, including California.

In the video, the former Disney star, who rose to fame playing Hannah Montana, is seen laughing and giggling, exclaiming, "Is that me tripping?"

In a web posting, her father, country singer Billy Ray Cyrus, says he was saddened by the video. Only a month ago, he announced he was divorcing Miley's mother. In the posting, Billy Ray says of the bong incident, "Sorry, guys. I had no idea. Just saw this stuff for the first time myself. … There is so much beyond my control right now."

There's been no formal comment from Miley or her representatives.

But, notes CBS News Correspondent Dave Browde, but it's the latest in a string of thoroughly adult embarrassments for Miley. She said she was embarrassed after a photo shoot at age 15 for "Vanity Fair." Her recent music videos have drawn criticism for their not at all Disney-like content. And on top of all that, her jewelry line was pulled from Walmart shelves after it was found to contain a toxic metal."

The video might not be considered all that surprising, says In Touch Weekly Senior Editor Amy Palmer.

"(Miley's been telling us in the past year that) she's no longer Hannah Montana," Palmer remarked to "Early Show on Saturday Morning" co-anchor Chris Wragge. "We've seen it in her videos. We've seen it in her music. … (In) her music video, 'Can't Be Tamed,' she has wings, she's spreading her wings. She's giving us the message that she's not that Disney star anymore. And with the (bong) video … it's true. She's not."

Miley made $48 million this year alone, but, says Palmer, "This is definitely a red flag. If this continues, this will definitely hurt her brand. Let's not forget her brand, her clothing is in Walmart. She has so many merchandising deals all over the world. So her handlers have to look at this and say, 'What's the next step?' If it continues, it will definitely hurt her. But if it's one incident, I think she'll be OK."

Goodman points out Miley "is a teen, and she's been working since she was a young girl. And Billy Ray Cyrus has been instrumental in that career. His tweet clearly showed that he is really sad about this. Let's not forget, he's going through a very bitter divorce with her mother right now. They've been married 17 years, and Miley is just not taking it well. So, this could also be a cry for help on her part."

The video, Goodman adds, "just shows that, even though she's a megastar, she's still a kid. Who lets somebody take a video of themselves in such a compromising position and for such a long period of time?

' … I think it's very important for her to look at it and say, 'What is the next step?' Maybe she's going to make a statement; maybe she'll come out and align herself with a teen group that, you know, advocates against (illegal drugs). But I think it's really important for her to step back and say, 'OK, this is my brand and my image, and I have to really protect it."'

This career path seems similar to that of celebs such as Britney Spears and Lindsay Lohan, Wragge pointed out.

"That's the issue," Goodman agreed. "It's what is the grace in terms of going from child star to young adult star and not many people have been able to do it. I think, if you look at Natalie Portman, she's a great example of how to do it, but a lot of these stars misstep, and this just another example of that."