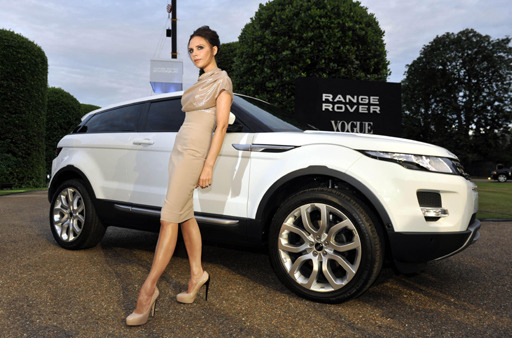 NEW YORK (CBS) Victoria Beckham is making her move from the runway to the driveway.

The former-Spice-Girl-turned-fashion-designer was appointed as the new creative design director for Range Rover at the brands 40th anniversary celebration in London Thursday.

While at the bash, Beckham showed off her dignified fashion style by wearing an on-trend nude dress from her own collection, paired with tan Brian Atwood pumps.

Beckham, 35, will lend her "posh" sense and advise interior design on future special editions of the car, starting with the Special Edition Range Rover Evoque, a lightweight, greener sport utility-coupe.

"She's established herself in her own right as a designer and she has some interesting perspectives and she's owned Range Rovers for years and years so it will be interesting to get an outside point of view, somebody that's really aware of the luxury goods sector of the market which is really important to us," said Range Rover Design Director Gerry McGovern.

Back in 2008, Beckham launched her own ready-to-wear collection that includes ultra feminine sheath and shift dresses.  Defined by sharp tailoring and body-conscious silhouettes, her designs became an instant hit with fashion critics and are often seen worn by celebs on the red carpet.