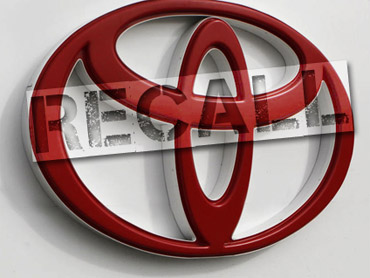 On August 28, 2009, Mark Saylor was driving a 2009 Lexus ES 350 a dealer had given him as a loaner while his own Lexus was in for minor repairs. The ride would turn tragic.

One of the people in the car made a frantic 911 call, saying they were in a runaway Lexus. It ended with the words, "We're approaching the intersection. Hold on! Hold on and pray. Pray!"

Police in Santee, Calif., outside San Diego, say the Lexus was going more than 120 mph when it hit an SUV, flew off an embankment, rolled several times, then burst into flames. Saylor, an off-duty California Highway Patrol officer, his wife, their 13-year-old daughter, and his wife's brother were killed.

The crash was blamed in part on a faulty floor mat that kept the accelerator depressed. That triggered a massive Toyota recall involving the mats.

And today, Toyota's president, Akio Toyoda, is slated to go before a House panel probing the unintended acceleration problem and his company's response to it.

Joe Audal, a family spokesperson and cousin of two of the victims that day, says he wants Toyoda to be asked "any question that leads to the truth. We just want to know the truth, plain and simple.

Audal's aunt, the mother of Mark Saylor's wife, is scheduled to testify today, as well.

How to Stop a Runaway Vehicle

"She'll say whatever's in her heart," Audal told "Early Show" co-anchor Maggie Rodriguez. "She's the face of this recall. We just want to put a human element to the tragedy and the recalls."

"It's absolutely devastating to lose your family members in those circumstances," Audal said. "It's heartbreaking, especially when you know it could have been prevented."

Audal told CBS News, "What we want to accomplish today is to put the issue of 'sudden unintended acceleration" to the forefront. We want them to find a solution as soon as possible, because we don't want this to happen to anyone else."

Saylor family lawyer Tim Pestotnik explained that, "The (San Diego County) sheriff's report believes the floor mat … was part of the reason for the crash. There was no ability by the sheriffs to determine that that was the only cause for the crash, because they were not able to do further testing because the car was completely destroyed.

"So, the open questions and questions for today include the electronic components, the software and the mechanical components, none of which were able to be tested in our crash situation."

In prepared testimony today, Toyoda says, "Especially, I would like to extend my condolences to the members of the Saylor family, for the accident in San Diego. I would like to send my prayers again, and I will do everything in my power to ensure that such a tragedy never happens again."

Audal, who says Toyota hasn't said it's sorry to him or any members of his family, told Rodriguez Toyoda's apology today will be "a nice gesture but we hope he can follow through with what he's saying."

He says, "It's hard just recounting the events that took place that day. It's really hard just thinking about it. Even to this day I still can't believe that they're gone. They were so close to me. You just miss them terribly."