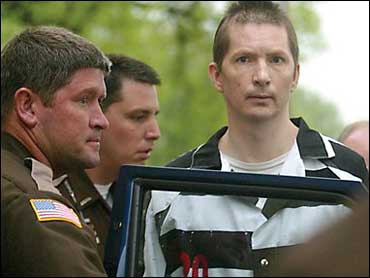 An inmate accused of forcibly tattooing a slain 10-year-old girl's name onto her killer's forehead in an Indiana prison was the victim's cousin, a family friend said.

Jared Harris, 22, is a cousin of Katlyn "Katie" Collman, family friend and spokesman Terry Gray confirmed to The Republic newspaper. He said he did not believe they knew each other well.

Harris, 22, who is serving time on a burglary conviction at Wabash Valley state prison in Carlisle, has been charged with battery and is accused of tattooing "KATIE'S REVENGE" across Anthony Ray Stockelman's forehead.

Harris told prison officials the attack was in revenge, according to an affidavit.

Stockelman is serving a life sentence after pleading guilty to abducting, molesting and killing the 10-year-old girl, who lived about 70 miles south of Indianapolis. She was missing for five days before her body was found Jan. 30, 2005, in a creek about 15 miles from her home.

The affidavit said that prison officials transferred Harris to the same prison wing as Stockelman on Sept. 19, three days before the attack, and that Harris subsequently threatened Stockelman's life several times.

Harris slipped into the open cell Stockelman shared with another prisoner on Sept. 22 and, when Stockelman returned, Harris closed the locking cell door, according to the affidavit.

Stockelman told investigators that Harris put his right hand around his throat and told him, "I'm either gonna stick you and leave you bleeding or I'm gonna tattoo you." After applying the tattoo using a makeshift tattoo gun, Harris discarded the device in a trash can, he told investigators.