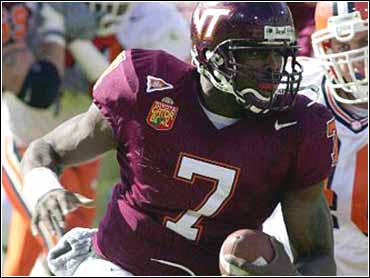 Michael Vick has called an agent audible, but the quarterback who could be the No. 1 pick in the NFL draft has yet to announce a replacement for his Richmond-based representative.

Dave Lowman, senior vice president for Joel Enterprises, said the former Virginia Tech star sent a letter to the company Thursday which said, "we have been terminated."

Just last week, the company announced it had been hired by Vick.

The letter, dated Jan. 18, did not give a reason for firing the agent, but said the termination was "effective immediately."

Michael Duberstein, director of research with the NFL Players Association, said the association received a faxed copy of the letter Tuesday, along with a copy of a similar one addressed to Dan Kelly, a marketing agent. Kelly was hired by Joel Enterprises to do Vick's marketing, Lowman said.

"He's a good kid, a good guy, and I wish him all the luck in the world," Lowman said of Vick. He said he didn't know whether Vick had a new agent, but indicated that was probably the reason for his termination of Joel Enterprises.

"It's just a shame that people get to players," Lowman said. "I don't think a kid who's 20 years old knows how to go through the process without somebody helping them."

Vick, who lives in Newport News, Va., announced Jan. 11 he would forgo his final two years of college eligibility to turn pro. He said his reconsideration of his agent was a business decision.

"I feel I rushed it," Vick told the Daily Press of Newport News on Wednesday. He added that he first had contact with agent Andrew Joel in November, after the Hokies' regular season ended.

"I believe I have kind of matured since then. I started looking at everything and decided I wanted to make the decision that was best for me. I started talking to other people, I talked to (Washington defensive end) Bruce Smith, and it made me start thinking that I had to find somebody with more experience and class."

Kelly and Joel said on Jan. 17 that Vick had hired them as his agents, and the NFL Players Association confirmed the hire.

Joel Enterprises was a surprising choice for Vick, who will likely command a contract worth between $50 million and $60 million if he is chosen first overall, as expected.

The firm also represents Deon Dyer of the Miami Dolphins and former Vick teammate Shyrone Stith of the Jacksonville Jaguars, but is far from a high-profile agency.

Vick, a left-hander with a powerful arm and the elusiveness to fit into the growing trend of multidimensional quarterbacks, led the Hokies to consecutive 11-1 records, a spot in last season's national championship game and this year's Gator Bowl.