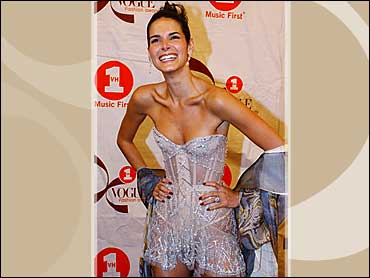 A little bit of funk and a whole lot of fashion was on stage Tuesday night at the VH-1 Vogue Fashion Awards at Radio City Music Hall in New York.

When the rockers weren't singing, stars like Jennifer Lopez were picking up trophies.Hugh Grant and P. Diddy presented the statuettes to top models and designers.

"It's an evening where everyone turns out. We have a lot of fun," said Vogue editor, Anna Wintour.

P. Diddy Combs was wearing Ralph Lauren and paid tribute to the designer. "I'm giving Ralph Lauren the Lifetime Achievement Award," he said. And a very excited host - Debra Messing from "Will & Grace" - showed up in a beautiful white gown from Alexander McQueen.

John Travolta highlighted his taste for high-end fashion. "I either like jeans and T-shirts and casual stuff or high end. I don't kind of like the in-between stuff. So that's just from being a kid in the '60s. High-end was very in." He presented Tom Ford the Designer-of-the Year trophy.

Jennifer Lopez was demurely dressed in a white tam, white shirt, black sweater and a flared white miniskirt. She got her Most-Influential-Star-of-the-Year award from Donatella Versace.

Who does she look up to for fashion sense?

"My mother put fashion sense in me, I think," she said.

As for fashion pet peeves, Evangelista found out Natalie Portman was not into leather and Claire Danes, who wore a green Prada dress, told him she hated wearing thongs. "I think they're sort of inhumane. But what I hate even more than that is a visible panty line." She was not the only one, singer Paula Abdul shared her dislike.

Jason Seahorn said his fashion pet peeve was "when somebody falls in love with something and can't get rid of it and has to wear it all the time." Angie Harmon noted, unlike her, he throws away everything. "They have new seasons for a reason," Seahorn added. The couple was named the Best Dressed.

Fit At 50 And Beyond