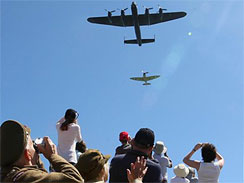 British veterans of the Battle of Britain, the furious aerial conflict between British and German aircraft in 1940, joined Sunday in a ceremony marking the 70th anniversary of the battle.

Around 5,000 people, including Prince Michael of Kent and Air Chief Marshal Sir Stephen Dalton, the senior commander of the Royal Air Force, converged at the Battle of Britain memorial at Capel-le-Ferne near the English Channel port of Dover.

Malcolm Triggs, a spokesman for the event, said 19 veterans attended. A Spitfire fighter and Lancaster bomber flew past in tribute.

"The Battle of Britain was, for this country, arguably the most important battle of the 20th century," said Group Capt. Patrick Tootal, secretary of the Memorial Trust.

"We pay tribute each July to the men of RAF Fighter Command - 'The Few' - who were at the forefront of preventing a possible German invasion, as well as to the many men and women who supported them and helped to ensure that we all live in freedom today."

"The few" recalls the tribute paid by wartime Prime Minister Winston Churchill: "Never was so much owed by so many to so few."

During the conflict, which raged between July 10 and Oct. 31, 544 British and allied airmen were killed.

It is believed that about 100 British air force veterans who served in the Battle of Britain survive.