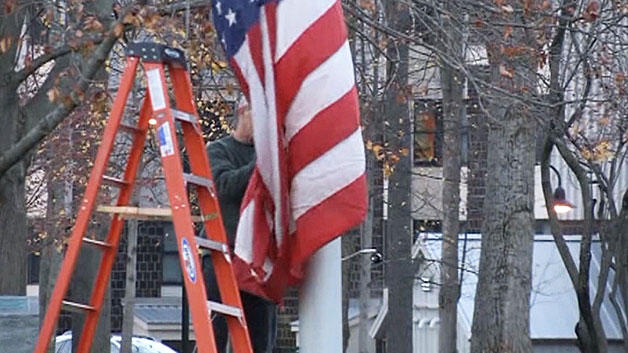 AMHERST, Mass. - Veterans protested Sunday at a western Massachusetts college facing criticism from around the country for its decision to stop flying U.S. flags after students allegedly burned a flag in protest of Donald Trump’s presidential election.

Dozens of veterans and other demonstrators held American flags and chanted “U.S.A.” at Hampshire College in Amherst on Sunday, in what organizers called a “peaceful demonstration of freedom.”

Local veterans and others intended to place hundreds of U.S. flags on the streets around the college.

College officials decided to indefinitely stop flying flags earlier this month after the main flag in the center of campus was burned after students lowered the banner to half-staff. Officials replaced the flag, but it was lowered again.

In a statement about their decision to remove the flag, college officials said: “This decision is not and was never a commentary on the presidential election.”

Clarifying the statement, Hampshire College President Jonathan Lash told CBS Boston he knows it’s a controversial decision to remove the flag, but he wanted to create a dialogue among those with differing opinions about the symbol.

“There were a range of views on campus, including people whose experience growing up have made the flag a symbol of fear, which was strengthened by the toxic language during the campaign, and people for whom the flag is the symbol of all that’s best throughout the country,” said Lash.

He said the trouble started with a gesture meant to help provoke “meaningful and respectful dialogue” on campus–a stance he outlined in a post on the college’s Facebook page. In that post, he said the Board of Trustees decided to fly the flag at half-staff due to the “environment of escalating hate-based violence” in the wake of the election.

Lash said the gesture was also meant to be an “expression of grief” over deaths around the world, including those of U.S. service members.

But, the move didn’t work as planned and many–especially veterans and families of veterans in the Hampshire College family–saw it as being disrespectful of the tradition of expressing mourning on a national level.

On Veterans Day, someone removed the flag and burned it.

“In the middle of the night, we have no idea who did it or even why,” said Lash.

So that’s why they decided to take down the U.S. flag–and all flags–on campus.

“The flag had become a heated symbol that was making that more difficult,” Lash said. “We really feel our community needs a conversation in which both sides listen to each other, and we wish the nation would have that kind of dialogue. We felt that if we could stop arguing about the symbol, we could get to the underlying issues.”

Of course, that decision has created even more backlash, and Lash said there “certainly is” a lot of anger about the decision.