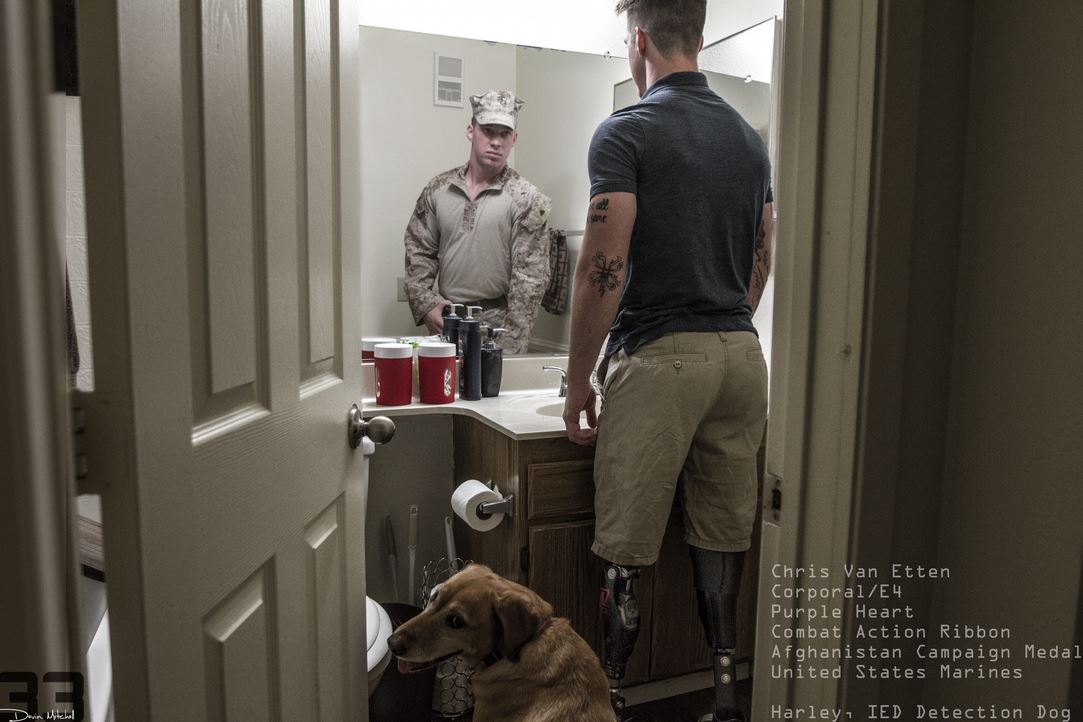 For anyone curious about the lives of veterans once they return home, the Veteran Vision Project photo collection is a revelation.

No one is speaking in a still photo, but they're still sending signals, reports CBS News correspondent Wyatt Andrews. In this collection, one photographer has asked dozens of veterans to send messages or tell stories about themselves while posing in front of a mirror.

There are more than 130 photos so far of veterans and active duty service members, and they are projecting who they are. or what's hiding behind the uniform, with all of it revealed through the looking glass.

What viewers get to see is unabashed joy and unrelenting pain. There is pride, diversity, and there are Americans free to be whatever. And while the photos are very different, the format is the same. On one side of the mirror the veteran is in uniform, on the other is an image the veterans choose themselves.

The photographer is Devin Mitchell, an amateur photographer and a sociology student at Arizona State University. He started the project to bolster his application to go to grad school.

Here's the concept: Mitchell takes the photos and creates the mirror images through a photo editing system, but he never suggests what anyone should show or should be.

"The only way to get the truth from anyone is to allow them to create what their story is," Mitchell said.

The first image was taken in August, and later posted to Instagram. Soon thousands of people started following his account. In the last six months, over a thousand veterans have reached out to him asking for their story to be told.

Devin said the accessibility of Instagram and social media has created a large audience. He said that many of the images are messages to other veterans, whether it is an image depicting a divorce caused by PTSD or a single mom in the Navy.

"It's relatable," Mitchell said. "Everybody sees themselves in this project."

Marine veteran Cpl. Chris Van Etten hopes the message from his image, number 33, helps inspire those injured from the wars. Van Etten lost both legs in Afghanistan, but today he has a modeling career. In his image, his military-self stares intensely into the eyes of his civilian, veteran self. That stare into the mirror he said is a pep talk, and not just to himself.

"The goal is that someone will look at that picture and be like, 'I need to keep going. It will get better,'" Van Etten said. "Basically, telling myself not to be a punk."

One of the clearest messages is the pain of PTSD. Some even have it written on their hands. They want us to see the drugs, the many medications, the pills combined with alcohol they use to fend off depression.

Image number 133 is of Marine veteran Andrew McLaren. McLaren said his message, which is the number 22 crossed out, replaced by 22, is a resolve not be the 22nd veteran today to commit suicide, the nation's daily average.

Minutes before Mitchell took the image of McLaren, he asked him how he was feeling and what he wanted to say in the image. Soon, McLaren unleashed pure anguish at how hard it is to not be that number.

"I just want to kill myself every day, and the only reason I don't do it is because of my kids," McLaren said.

Mitchell said later that standing in the room with McLaren, like many of the veterans, is important.

"I felt like he was in a place of need and I wouldn't want to be in any other place in the world except for in that very spot... those are the places that I want to be," Mitchell said.

He said many of the veterans look at the process of taking the photographs as therapy.

"Maybe they feel they're alone, that no one else feels what they're going through other than them," Mitchell added.

One of the most powerful images is also the smallest. Image number 23 is of 8-year-old Rachel Hope. She is standing at attention in the reflection of the mirror. In front, she is sitting alone on her bed. Her parents, Jennifer and Shamar, are still in the Navy and have deployed simultaneously three times. But even when they are gone, Rachel told CBS News, she is serving with them.

"When something dangerous happens, or I watch the news that danger is happening, I feel like, well, I'm a part of this," Rachel said.

In so many of photos, there is unmistakable celebration. Family reunions no one takes for granted anymore. The pride in having served, next to the relief at being home.

In image number 130 Craig Millward, an Army veteran, stands with his wife, Deva. It is a story of love and triumph. In the reflection, Craig is in his uniform leaning over the sink. Deva stands behind him with her hand on his arm, supporting her husband. Unlike most images Deva, who is not a veteran or active duty soldier, is in both images.

"We had a lot stacked up against us," Deva said.

The image's message, she said, is that they "beat the system." When Millward returned from deployment to Afghanistan in 2006, his reintegration process was difficult. It was hard to find a stable job, he was diagnosed with PTSD, and the two were newlyweds. But Millward said his wife's conviction helped him become the man he is today.

Mitchell's goal is to take 10,000 images of veterans and active duty service members from across the country. If you are interested in being a part of Mitchell's project or viewing his photographs, visit www.veteranvisionproject.com.