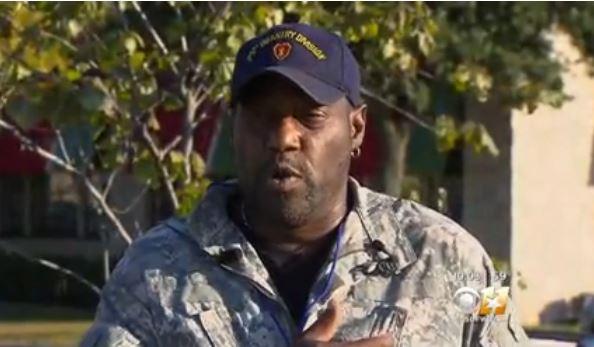 CEDAR HILL, Texas – Attorneys are hoping to resolve a dispute between a local veteran and the restaurant he says humiliated him during what was supposed to be a Veterans Day tribute.

Ernest Walker and his attorney met with reporters at the Cedar Hill Chili’s onSunday afternoon after a meeting with the restaurant’s parent company was postponed, reports CBS Dallas.

In the meantime, people on behalf of the company have expressed some regret about what happened here.

Video of a Chili’s manager snatching the meal Army veteran Ernest Walker received as part of the restaurant’s Veterans Day tribute sent shockwaves across the internet.

CBS 11’s story on the incident drew hundreds of comments and thousands of reactions on Facebook, but Walker says the response he wants is from Chili’s.

“I personally have not heard from them, no,” Walker said.

Chili’s parent company, Brinker International sent us a written statement that reads in part, “We are taking this very seriously and the leaders in our company are actively involved with the goal of making it right.”

The restaurant chain also posted several responses to customers on its Facebook page writing in part, “Unfortunately, we fell short on a day that we strive to honor our Veterans and active military for their service.”

On Veterans Day, Walker says a manager told him customers had questioned whether he was really a veteran, so he showed the manager his identification along with his military discharge document as proof of his service.

While much of the public response since then has been in support of Walker, some have voiced suspicions about his uniform he says he bought after he retired to wear on Veterans Day as tribute to his prior service.

“This is what I’m able to wear. Excuse me, okay, and I purposely don’t wear rank or a name tag as not to be identified as an active soldier,” Walker said.

Walker’s attorney, Kim Cole, says an attorney for Brinker has apologized to her on behalf of the company, and the two sides plan to meet on Monday to discuss the incident.

“I certainly hope that Brinker International takes a stand and makes it clear that they don’t condone that type of behavior in their establishment,” Cole said.

Walker said he plans to file assault charges against the manager he says made physical contact when he took back his free meal. However, he also says he’s a forgiving person and hopes meeting with Brinker will be a positive step.